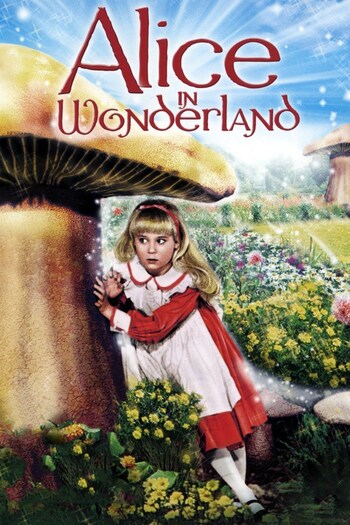 Alice in Wonderland is a 1985 two-part CBS Made-for-TV Movie adaptation of Lewis Carroll's books Alice's Adventures in Wonderland and Through the Looking-Glass.

Directed by Harry Harris and produced by Irwin Allen, it stars Natalie Gregory as Alice and features an All-Star Cast of supporting players, including Red Buttons as the White Rabbit, Anthony Newley as the Mad Hatter, Jayne Meadows as the Queen of Hearts, Carol Channing as the White Queen, Roddy McDowall as the March Hare, Ann Jillian as The Red Queen, Robert Morley as the King of Hearts, Ringo Starr as the Mock Turtle, Sammy Davis Jr. as the Caterpillar, and Telly Savalas as the Cheshire Cat.

In the film, seven-year-old Alice isn't allowed to participate in tea parties because her parents don't believe she is grown-up enough, and this becomes a driving factor for Alice through her journey, with Alice trying to be more grown up as a theme throughout. Musical numbers aside, the adaptation goes on to follow both books fairly closely, aided with costumed actors.

The film adaptation provides examples of the following tropes: