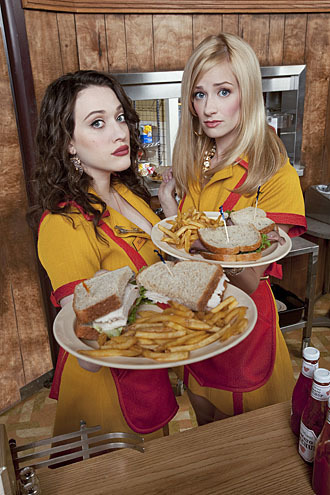 Max and Caroline are about to serve you lunch, and snarky comments.
Advertisement:

2 Broke Girls was a Sitcom that aired on CBS. The story follows Max Black (Kat Dennings), a waitress at a local diner, and her new co-worker Caroline Channing (Beth Behrs), the daughter of a wealthy man whose bank accounts were frozen after he was found guilty of enacting a Ponzi scheme. With no money to her name, Caroline has left her usual neighborhood in search of work, which is how she ended up working at the diner with Max.

Created by Michael Patrick King and Whitney Cummings (one of two series she launched that season), the show premiered on CBS on September 19, 2011. It ran for six seasons until a contract/payment dispute between CBS (where it aired) and Warner Bros. (where it was produced) led to its cancellation on April 17, 2017.