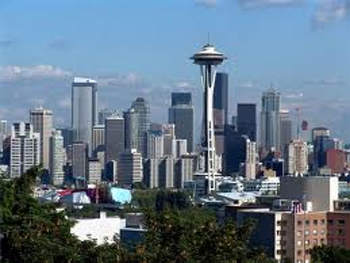 "Hey baby, I hear the blues a-callin'..."
Well, we spread the word through the underground
That we were the hottest new thing in town
A record guy came out to see us one day
And just like always, we didn't play
And it knocked him out—he said he loved our work
He said he loved our work but he wasn't sure if he could sell a record with nothing on it
I said, "Tell him we're from Seattle"
He advanced us two and a half million dollars
— Todd Snider, "Talking Seattle Grunge Rock Blues"
Advertisement:

A city situated on the Puget Sound's eastern bank in the state of Washington and its surrounding metro area. Named for a 19th-century Duwamish tribal chief from the region who did not give an environmental speech often attributed to him. Home base of (or at least the origin-point for) Microsoft, Nintendo of America, Valve, Starbucks, Boeing, Amazon and several other companies of note. The birthplace of Grunge music (Nirvana in particular, despite not being from the city itself). Its landmarks include Pike Place Market (where the very first Starbucks is located), Pioneer Square (which pre-gentrification was the original Skid Row), the Museum of Pop Culture (or whatever its name is this week), a half-mile Monorail constructed for the 1962 World's Fair which exemplifies Zeerust to a tee, the Seattle Underground (which was a partial inspiration for Ankh-Morpork), and the Space Needle (which is not nearly as tall as it looks in photos), also constructed for the World's Fair. Navigation and traffic in the area are notoriously frustrating, among the top ten worst in the country.

Seen as trendy and bohemian by many thanks to grunge and Frasier. Often used in fiction as a destination for a character being sent on a very long bus ride.

In media, thanks to the cheaper filming costs, Vancouver, British Columbia is often used as a stand-in for Seattle or for unidentified parts of the USA resembling Seattle, leading to the term "Seacouver" for such settings.

Seattle remains one of the major hubs of video game development in America behind the LA/San Francisco/Silicon Valley region, possessing the aforementioned Nintendo and Valve along with numerous other developers. It's also ranked as the best American city for gamers not just for the aforementioned status as a game development hub; it's also notable for its abundance of video game stores.

Until the 2013 Seahawks team and their "12th Man" fan-brigade finally broke the drought, the city trailed only Cleveland in being the Butt-Monkey of the US sports world due to its spotty track record in regards to major league sports. (Six championships in the entire city's modern history) In recent years, the situation had been particularly grim, with even the once-powerful University of Washington Huskies NCAA football team having the worst single season record in history and the Seattle SuperSonics NBA team being spirited away to Oklahoma City.

Don't fret, though! The city is still very known for sports notoriety, mainly because of the Seattle Mariners, an expansion team created in the wake of the original team, the Pilots, being moved after their first season to Milwaukee (a lawsuit was also involved). They didn't have a winning season for the first fourteen years of their existence. They nearly got moved to Florida before a miracle rally and their first playoff appearance saved the team, though they eventually lost to the New York Yankees. They won 116 games in 2001, matching a regular-season record, but not only fell to the Yankees in the playoffs but haven't even been to the playoffs since then. In the process, they had a year where they spent $100 million on payroll and still managed to lose over 100 games. Also, with the Washington Nationals making it to (and even winning) the World Series in 2019, the Mariners remain the sole MLB team with nary a single trip to the Fall Classic. One would not be surprised to find them pushing a boulder alongside Sisyphus.

Not helping matters is the fact that the city is famous for rain, which is decidedly at odds with the interests of the typical sports fan. The sports fans who do call the area home responded to the aforementioned pirating of their NBA franchise by latching onto Seattle Sounders FC of MLS, and making it one of the few teams in the league to regularly sell out the stadium. Lumen Field (formerly Qwest Field and CenturyLink Field), the home stadium to the Sounders and Seahawks, was from 2007 to 2010 true to the city's rebellious spirit by being the only stadium in the NFL to serve neither Pepsi nor Coca-Cola beverages on its grounds, having instead awarded its concession to the locally-based Jones Soda Company. The rights have since been granted to Coca-Cola, which definitely makes going to Sounders games a lot less fun. In 2022, Lumen Field became home to a third team, namely OL Reign of the National Women's Soccer League. That team returned to Seattle after a three-season interlude in Tacoma.note The "OL" comes from prominent French soccer club Olympique Lyonnais, which bought a majority stake in the team in the 2019–20 offseason. The team had previously been Seattle Reign FC and Reign FC.

The city's tumultuous history with hockey should also be mentioned. The Seattle Metropolitans were the very first American team to win the Stanley Cup in 1915, but the team folded two years later. Various attempts to bring pro hockey back to Seattle were made in the 1970s and the 1990s, but such attempts never left Development Hell due to various issues. After the SuperSonics left for Oklahoma City, interest began picking up in having an NHL expansion team. The Phoenix Coyotes almost moved to Seattle, but ultimately stayed where they were. Progress finally began when the Seattle City Council approved renovations to the former home of the SuperSonics, KeyArena, to make it more suitable for hockey (which had been one of the factors in previous attempts floundering). A new ownership group, with Jerry Bruckheimer at the helm, is in charge (and is also looking into potentially reviving the SuperSonics), perhaps even by having them play in their former home (now named Climate Pledge Arena). The name was announced in July 2020... the Seattle Kraken! And yes, they announced it

exactly the way you'd think they would. The name was chosen to honor both Seattle's maritime heritage, and the native Giant Pacific octopus

. The team's logo is suitably badass

Home to the authors of the webcomic Penny Arcade, who, as the above paragraphs illustrate, have difficulty understanding

the Team Spirit of sports.

Bruce Lee settled in Seattle and graduated with a degree in psychology from the University of Washington. He is buried at Lake View Cemetery in Capitol Hill.

Is also the hometown of Sir Mix-a-Lot, whose song "Posse on Broadway" was based on Seattle's Capitol Hill neighborhood.

In addition to the monorail, Seattle is the hub of the largest passenger and automobile ferry fleet in the world, as measured by number of vehicles carried. Its unique car ferries are almost always featured in media from Seattle. It's also home to the two longest floating bridges in the world: the 520 bridge, officially known as the SR 520 Albert D. Rosellini Evergreen Point Floating Bridge (which replaced the original Evergreen Point Floating Bridge in 2016) being the absolute longest at 7,710 ft (2,350 m), and the eastbound I-90 bridge, officially known as the Lacey V. Murrow Memorial Bridge, being the second-longest at 6,620 ft (2,020 m). The I-90 bridge is actually two bridges colloquially grouped together; the westbound bridge is the Homer M. Hadley Memorial Bridge, 5,811 ft (1,771 m) long, spanning Lake Washington to Mercer Island east of the city. The third-longest floating bridge, the Hood Canal bridgenote officially William A. Bugge Bridge, and the longest floating bridge located in a saltwater tidal basin at (floating portion) 6,521 feet (1,988 m) (full length 7,869 feet (2,398 m)), is around thirty miles northwest of the first two.

About half an hour to the south is the city of Tacoma (the "Tac" in SeaTac, which is a geographic area as well as the nickname for Seattle-Tacoma International Airport). It used to be a fairly industrial town, infamous for the horrible "Tacoma Aroma" produced by the city's paper mills, but has undergone revitalization in recent years due to increased port traffic, various downtown renewal projects, and an influx of consumer dollars from troops stationed at the burgeoning Joint Base Lewis-McChord, an Army/Air Force facility just to its south. Even the former site of the ASARCO smelting plant is being turned into luxury housing (why anyone would want to live over a former toxic waste site is another question). Its most famous son is arguably the one-eyed glass artist Dale Chihuly, whose works are all over the city (from Seattle's Benaroya Hall to one of the McDonald's). Unlike Seattle, Tacoma hosts no major league teams of its own, though the Mariners' triple-A affiliate (the Tacoma Rainiers) is regionally popular, and the Tacoma Dome (in addition to being an occasional WWE venue) has occasionally hosted Seattle's teams while their home venues were being renovated. Its other famous piece of architecture is Stadium High School

, most famous for being where 10 Things I Hate About You was shot, and for looking like a castle. About 10 miles southeast of Tacoma is the smaller city of Puyallup, a local shibboleth (in case you're curious, the correct pronunciation is something like "Pew-AL-up.") The Puyallup Fair was recently renamed the Washington State Fair, to mixed reception, and regularly ranks among the ten largest fairs in the country.

Just to the east of Lake Washington is "the Eastside", which covers Bellevue, Redmond, Renton, Kirkland, Issaquah, Medina, and other assorted cities and towns. If you hear someone from this area mention the Eastside, this is what they're talking about—not Central and Eastern Washington, on the eastern side of the mountains.

Fiction set in or near Seattle: