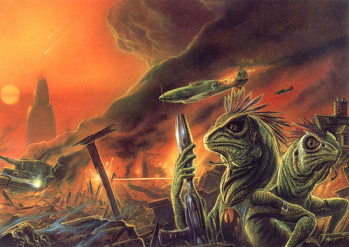 What if aliens invaded during World War II?
"1865 — Alien bats from outer space bring the fruits of their technology to their brothers, because they have heard Elvis Presley on the radio, and think that the south should indeed be free. It ranks slightly higher than a '63 CSA victory. Indeed, I think I will call it "Bats of the South", and make it into a four book trilogy."
— Alison Brooks, discussing the probability of various Alternate History Confederate victories in The American Civil War on soc.history.what-if
Advertisement:

An Alternate History trope dealing with the divergence of a timeline. If the Point of Divergence is an extraordinary or supernatural phenomenon, Alien Space Bats are responsible.

The phrase was originally coined by the late Alison Brooks as a sarcastic comment on ridiculous alternate history timelines with no realistic chance of happening without some sort of Deus ex Machina as implausibly contrived as bringing in a bunch of Sufficiently Advanced Alien bats. It was only later that it came to mean "explicitly magical or science-fiction what-ifs."

The trope may also apply when the point of divergence isn't actually supernatural, but is so wildly implausible that it might as well be that A Wizard Did It. See also Outside-Context Problem, which is for the times when the event isn't very supernatural nor implausible, but is so unexpected it catches everyone off guard.

Note that Tropes Are Tools: this can and does lead to some excellent yarns, especially if Schizo Tech is involved. Even if the event setting up the plot is fantastic or wildly improbable, that doesn't mean that the characters' reactions to it have to be equally unrealistic. However, people who use alternate history to explore the nature of real historical processes may regard Alien Space Bat stories as annoying distractions, or at least as trivial mind games.

A frequent mechanism by which Alien Space Bats intervene in human history is Mass Teleportation.note Sometimes colloquially referred to as an "ISOT" after S.M. Stirling's novel Island in the Sea of Time. When on a small scale, their intervention may leave people Trapped in the Past. See also Never Was This Universe.

Not to be confused with Goddamned Bats, or the Batman from Superman: Speeding Bullets, who actually is an alien. Only vaguely related to the movie Lifeforce, which is not AH, but has literal alien bats.

! That cites This Very Wiki!note It cites Giant Enemy Crab, but still.