Literature / The Lords of Creation 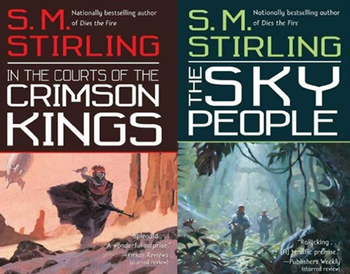 A series of Alternate History science fiction novels by S. M. Stirling, consisting thus far of The Sky People and In The Courts of the Crimson Kings. A Reconstruction of classic Planetary Romance novels and tropes for the modern audience, the novels explore a world built around a simple concept: what if Mars and Venus really were approximately like we envisioned them before all that boring reality got in the way?
Advertisement:

As scientific observation of our nearest planetary neighbors intensifies during the early 20th century, it becomes clear that both worlds have oxy-nitrogen atmospheres much like our own. By 1948, the possibility of life on both is so strong that the Space Race kicks in early and keeps going, radically altering political history from that point on as the Cold War begins to lose importance and military spending is diverted to exploration. And when the Russians finally land a probe on the surface of Venus in 1962, the first image its cameras send back is of a dinosaur-infested jungle. And the second image is of a beautiful blonde woman in a Fur Bikini being chased by a savage horde of neanderthals.

Two months later, when the American Viking probe tells us about the canal-building biotech-using humanoid Martians, the race to land on both worlds shifts into high gear.

But once contact has been made and permanent scientific studies begin, oddities begin to creep up. For one thing, the humans of Venus are entirely too human to be a product of parallel evolution — a conclusion reinforced by the simultaneous discoveries that some tribes speak a language clearly descended from Indo-European, and that only two hundred million years ago the planet was an uninhabitable acid-veiled hothouse, becoming Earthlike practically in the blink of an eye as far as the cosmic time scale goes.

As evidence mounts that someone has been tinkering with the worlds of the solar system for millions of years, continuing right into the last few millennia, the question humanity must ask is: Who are the Lords of Creation, and what do they intend for their great multiplanetary experiment?

Not to be confused with Lords Of Creation, a very weird role-playing game published in the mid-Eighties.

Alternative Title(s): In The Courts Of The Crimson Kings, The Sky People