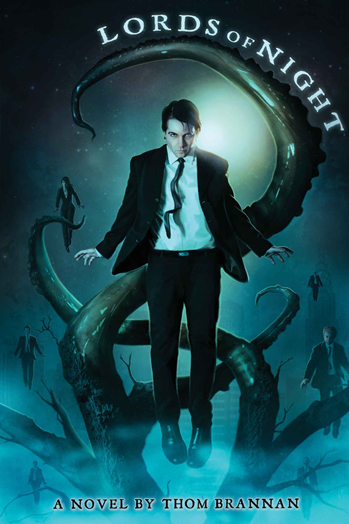 "A relentlessly brilliant new vision of the apocalypse."

An ancient evil worshiped as a god in the depths of time has awakened and turned the world into a desolate and dark place. The remnants of humanity are forced to take shelter where they can, hiding from the ravenous walking dead and their inhuman shepherds, the Locust People, and the Ancient Enemy’s lieutenants, the Lords of Night.

In one of New York City’s underground tunnels is a young man with a secret, a growing power he can use against the seething tides of walking dead and their sadistic overseers. His name is Jack, and he has taken it as his mission to retrieve an artifact from the Ancient Enemy’s past to free the world. Jack is untested...but he has help. The last group of Special Forces operatives is on his side.

Lords of Night is a novel by Thom Brannan and published by Permuted Press. It is a post-apocalyptic zombie novel which makes use of Aztec Mythology, Atlantis, and the pop culture mythology which has sprung up around both.