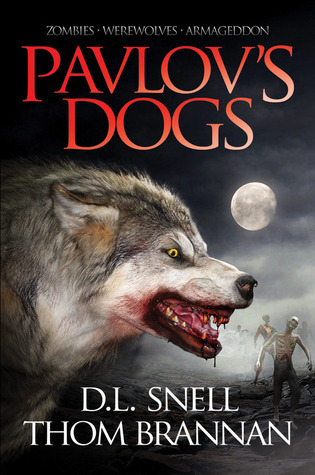 A novel series by D.L. Snell and Thom Brannan chronicling the end of the world in a Zombie Apocalypse but with the twist there is a small hope for mankind, a group of genetically-engineered werewolves on a small island. It's published by Permuted Press.

Dr. Crispin has engineered the saviors of mankind: Pavlov’s Dogs, a team of soldiers capable of transforming into fearsome beasts. But when Crispin and his team welcome a new talented neurotechnician to the island, Dr. Crispin quickly realizes his masterwork has fallen into the hands of a man he does not trust.

Back on the mainland, Ken Bishop and his best friend Jorge get caught in a traffic jam on their way home from work. There’s a wreck up ahead. And something worse. The first sign of a major outbreak—and Ken and Jorge are stuck in the gridlock. Not only do they need to escape, but they also need to save as many people as possible on the way.

Now Dr. Crispin and his team must make a terrible decision. Should they send the Dogs out into the zombie apocalypse to rescue survivors? Or should they listen to the new neurotechnician, who would have them hoard their resources and post the Dogs as island guards?

The book series, so far, consists of:

And a series of short-stories released on Amazon.com.