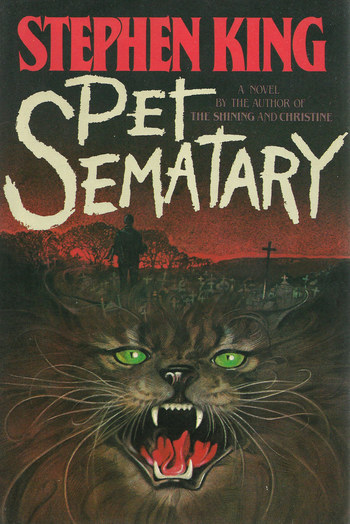 A 1983 horror novel by Stephen King, Pet Sematary was nominated for a World Fantasy Award for Best Novel in 1984.

Louis Creed, a doctor from Chicago, moves to a house near the small town of Ludlow, Maine with his wife Rachel, their two young children, Ellie and Gage, and Ellie's cat, Winston Churchill ("Church"). Their neighbor, an elderly man named Jud Crandall, warns Louis and Rachel about the highway that runs past their house; it is used by trucks from a nearby chemical plant that often pass by at high speeds. A few weeks after the Creeds move in, Jud takes the family on a walk in the woods behind their home. A well-tended path leads to a pet cemetery (misspelled "sematary") where the children of the town bury their deceased animals.

Louis has a traumatic experience as director of the University of Maine's campus health service when Victor Pascow, a student who is fatally injured after being struck by an automobile, addresses his dying words to Louis even though they have never met. On the night following Pascow's death, Louis is visited by the student's walking, conscious corpse, which leads him to the "sematary" and refers specifically to the "deadfall", a dangerous pile of tree and bush limbs that form a barrier at the back. Pascow warns Louis not to "go beyond, no matter how much you feel you need to."

In the book, Louis is forced to confront death at Halloween, when Jud's wife, Norma, suffers a near-fatal heart attack. Thanks to Louis's immediate attention, Norma recovers. In the movie adaptation, Jud is single and the Creed's maid, Missy Dandridge, commits suicide in their basement and the Creeds help arrange her funeral. After Church is run over while the kids are visiting their grandparents with Rachel for Thanksgiving, Jud leads Louis beyond the deadfall to an ancient burial ground that was once used by the Mi'kmaqs, a Native American tribe. Following Jud's instructions, Louis buries the cat and constructs a cairn. The next afternoon, the cat returns home. However, while he used to be vibrant and lively, he now acts ornery and "a little dead", in Louis's words.

Several months later Gage, who had just learned to walk, is run over by a speeding truck. Overcome with despair, Louis has Rachel and Ellie visit her parents again, not telling them his intentions. Louis exhumes his son's body and buries Gage at the burying ground. Gage returns as a demonic shadow of his former self, able to talk like an adult. Ellie has terrifying visions about that, which eventually convince Rachel to go back to Ludlow, where she meets Gage...

After learning that Gage killed Jud and Rachel, Louis kills him with a morphine injection. After that, his mind is pushed into its final stage of insanity. Louis, now completely insane and having prematurely aged, burns down Jud Crandall's house, then carries Rachel's body to the burying ground, saying that he "waited too long" with Gage but is confident that Rachel will come back the same as before...

King has said his goal was to write a novel too scary to be read all the way through, and many critics said he came uncomfortably close to accomplishing it. It's still regarded by many — including King himself — as the scariest thing he's ever written.

The 1989 film adaptation starred Dale Midkiff as Louis, Fred Gwynne as Jud, Denise Crosby as Rachel and Miko Hughes as Gage and was popular enough to warrant the sequel, Pet Sematary Two, in 1992.

The book was adapted again as Pet Sematary (2019) with Jason Clarke as Louis, Amy Seimetz as Rachel and John Lithgow as Jud. A prequel to this film is in development for Paramount+.

This book/movie provides examples of:

"I brought you something, Mommy!"
Feedback