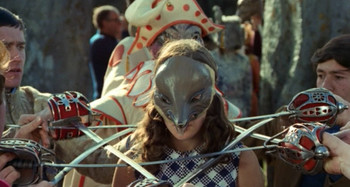 Horror based on old folklore.

This subtrope of Religious Horror is less concerned with organized faiths and divine beings as much as it's concerned with the old folkloric rituals in isolated rural areas. Thus, while it can still focus on a modern religion, it is more likely to focus on the pagan faiths of yore. Demons, cults and goblins haunt the woods while regular people try to survive. Organized religion is most likely corrupt and/or useless, though sadistic clergymen can be the true danger. If you're lucky, you'll have one heroic Badass Preacher among the whole lot, but it might not do any good against beings much older than any god we know. The phrase was coined by director Piers Haggard in an interview in the early 2000s to describe his earlier film The Blood on Satan's Claw.

While the genre was most common in Britain in The '60s and The '70s (around the same time British folk music was having a moment of its own), folk horror can be from any region or any time, and there has been a "Folk Horror Revival" in the 2010s and '20s as these tropes come back into prominence.

Regardless of when it's made, Folk Horror is always deeply rooted in the concept of the past. Therefore, when it's not an outright Period Piece, a lot of Folk Horror will feature a modern City Mouse protagonist suddenly confronted with a forgotten and violent past - usually by traveling to a more rural, tradition-bound locale like a Town with a Dark Secret. Sometimes it's the other way around, with cozy modernity itself being invaded by some ancient danger.

Belief, fear, and culture are key themes, and often a greater threat than the thing people are scared of - therefore, Maybe Magic, Maybe Mundane and Humans Are the Real Monsters are common tropes here as well. Things are dangerous enough even without overtly supernatural happenings.

Compare with Witch Works, which has a lot of overlap, and Horror Hippies and Hillbilly Horrors, both of which have a similar rural horror feel. Watch out for The Fair Folk, take care with the Sleep Paralysis Creatures at night and Don't Go in the Woods. May overlap with Dark Fantasy. See also Gothic Horror and Southern Gothic, which have a lot of overlap with this subgenre. In some ways, Folk Horror could even be seen as a modern take on gothic horror.