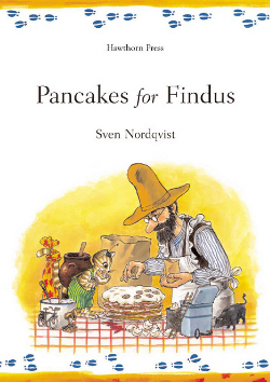 Cover of the first book

Pettson and Findus is a Swedish series of children’s books written and illustrated by Sven Nordqvist.

The stories feature an old farmer named Pettson and his cat Findus who live in a small village in the Swedish countryside. Pettson, Findus (who behaves more like a small child than a cat) and the chickens are all able to converse with each other, but they hide this from the other villagers who subsequently have come to view the old man who talks to his pets as something of a weirdo.

Pettson’s love for inventing strange apparatuses and the fact that even harmless activities like baking a birthday cake or gardening tend to result in absolute chaos certainly don’t help.

To date, ten stories have been published in Swedish, plus some tie-in books like a song book and a cook book.The books were very successful in Sweden and have been translated into over 40 languages. There are two different English translations. The UK version uses the original names of the characters, the US version refers to them as Festus and Mercury.

Pettson and Findus provides examples of: