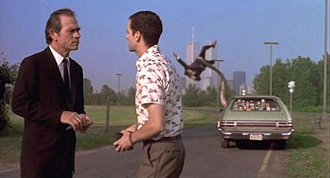 "What kind of an emergency? What's the rush to get off the planet all of a sudden?"note "KAY! KAAAAY!"
"We cut to Avengers Mansion, where all the superheroes that were not abducted are gathering, got a list, are already figuring out who is missing. There's a weird little drawing in the bottom left corner by Ron Lim where Iceman trips Speedball who apparently plants his face between She-Hulk's boobs. Is that something that Jim Starlin wrote into this cosmic script? Or was Ron Lim getting bored and was just like 'I gotta draw this for me.'"
— ComicTropes, "Jim Starlin's Great and Not-So-Great Cosmic Creations at Marvel"

The humorous counterpart to the Meaningful Background Event, and sometimes overlaps with Distant Reaction Shot.

Sometimes, a scene contains something funny going on in the background. Very often it is used during a conversation and if you are paying too much attention to the foreground, you may even miss the scene, especially if (as is often the case) the characters are looking away from it. The event can contain simple slapstick humor, or be an inside gag. It doesn't have to be subtle, sometimes it is obvious while the conversation is unimportant. The important thing is that it is played in the background and is at least somewhat funny or cool.

Despite the name, sometimes this can actually be in the foreground or momentarily panned over, but the important point is that the audience has their attention directed elsewhere.

Occasionally, this might be a result of Artificial Atmospheric Actions. See also Cue the Falling Object. Compare Annoying Background Event, which is only funny to the audience.

While Marge has a talk with Lisa about why she'll regret her decision to not go to college, Santa's Little Helper walks past the doorway with robotic spider legs and Snowball II flies past it in a UFO.

While Marge has a talk with Lisa about why she'll regret her decision to not go to college, Santa's Little Helper walks past the doorway with robotic spider legs and Snowball II flies past it in a UFO.