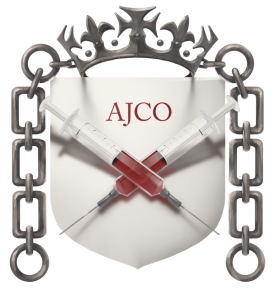 The AJCO coat of arms, as designed by Pythosblaze
Advertisement:

AJCO is a Minecraft-based roleplay server created by the eponymous AJ alongside her friends Celest R and Pythosblaze, and quickly built upon by various friends-of-friends from across the net. Who then brought their friends. Who brought theirs. Who brought - well, you get the idea.

Its genre would be best described as fantasy/sci-fi and, with the introduction of the State, dystopian. The plot tends to be seperated into 'arcs' resembling seasons, with smaller character-driven arcs taking place within their respective factions. AJCO (briefly Pi-TEC), the Deserters and the Castle Crew are the primary rivals while the neutrals watch on and occasionally interfere.

Numerous blogs are dedicated to recording the conversations that take place so that those who can't participate can still enjoy, with ajco-ltd

being the most active. Many RP participants also have AJCO-specific blogs, the most noteworthy of which being angelkaja

due to the amount of recorded RPs that get posted there. Now has its own official serious wiki