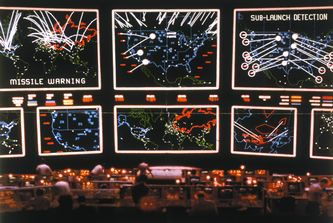 Apparently, multiplying the number of TV screens multiplies the oppressive factor of whatever scene they're in.

If there's Orwellian surveillance at work, the cameras will feed to a room carpeted from ceiling to floor by screens. Hard to keep track of? Bah! It's ominous. If the Evil Overlord is hijacking the airwaves for a broadcast, we will see it played in Times Square or some decent approximation, or he's hardly an Evil Overlord at all. If the computer system is maimed, chances are the owners will have conveniently filled their headquarters with screens, just so that they know how screwed they are.

Perhaps we're just that fond of variety in television.

Compare Do Not Adjust Your Set where the villain uses everyone else's screens. Also compare The Big Board, which is just one gigundous screen. See also Ominous Television when it's just one TV.