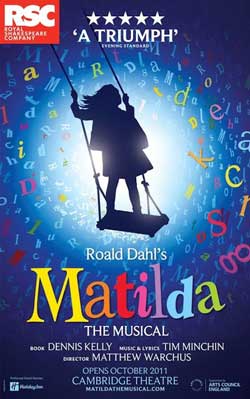 The Musical based on the Roald Dahl novel Matilda, which opened in Stratford in 2010. Moved to the West End in 2011, cleaned up on every award going, and made it to Broadway in 2013. Once again we follow young Bookworm Matilda as she contends first with her appalling parents, and then with the far more terrible figure of Miss Trunchbull, monstrous Child Hater and abusive head of Crunchem Hall who intimidates pupils and teachers alike — only this time we have the whole thing set to songs by Tim Minchin.

This show provides examples of (in addition to the novel's tropes):