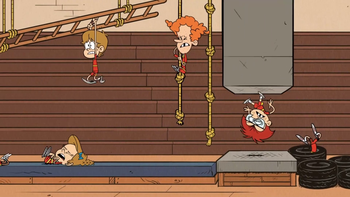 Somebody call the superintendent. Or the cops. Or both.
"In this stunning recreation of a junior high school gym class, the Damned can enjoy an endless series of humiliating locker room 'incidents', the taunts of demonic P.E. Coaches, the awkwardness of being forever trapped in an uncontrollable adolescent body, and the shame of not being able to do a pull-up. Now hit the ground and give me twenty!"
— Gym Class punishment description, Afterlife (1996)
Advertisement:

Gym, or P.E., is a standard part of school, and Gym Class Hell is a standard part of school stories. Awkward adolescents forced in front of a large group of their peers to attempt physical feats against their inclination, all while wearing hideous clothes that seem specifically designed to tell their classmates everything they don't want anyone to know about their bodies. We've all been there, and it wasn't pretty.

Since the protagonist of such a story tends to be an Ordinary High-School Student, they are usually not exceptionally strong or graceful and thus will struggle in Gym — at best. Alternately, they may be pretty good at it but have a best friend who is completely hopeless, or one activity they hate/are horrible at but have to master in order to pass. Popular, bullying students tend to do better, but this is often divided along gender lines — the Jerk Jock obviously has nothing to worry about, but the Alpha Bitch will frequently whine about messing up her hair. Since gym teachers are almost uniformly portrayed as Sadist Teachers in the Drill Sergeant Nasty mold, they will favor kids who play sports or cheerlead, leaving the weak and nerdy to be trampled into the highly waxed floorboards. Worst case scenario, the whole class isn't safe, no matter in which part of the Popularity Food Chain they find themselves in, having to complete unfair exercises that even trained army soldiers would have trouble with.

For the sake of this trope, many schools in fiction seem to have the time and budget to cover activities more complicated and expensive than you would normally see at a high school, such as rock climbing or fencing. Of course, dodgeball serves the same purpose for the price of one piece of equipment and some broken dreams.