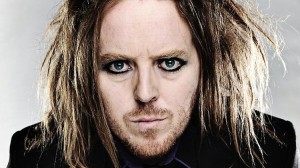 "And fine, if you wish to glorify Krishna and Vishnu in a post-colonial, condescending bottled-up and labeled kind of way... then whatever, that’s okay, but! Here’s what gives me a hard-on: I am a tiny, insignificant, ignorant lump of carbon. I have one life, and it is short, and unimportant...but thanks to recent scientific advances, I get to live twice as long as my great-great-great-great uncleses and auntses!"
Advertisement:
— "Storm"

Timothy David Minchin AM (born 7 October 1975 in Northampton, England) is a flame-haired Australian pianist who once wrote an album full of silly songs to get them out of his system. When he discovered that the public loved them more than his more serious work, he became a comedian, and proceeded to become quite famous both in Australia and in the UK. He's known for his Black Humor and for his spot-on criticisms of both the religious right and the new age left.

Several of his songs have official videos, including "The Pope Song" and "Storm", the latter of which has been adapted into an animated short

He hosted one episode of Never Mind the Buzzcocks and has now won an Olivier Award for writing the score to the hit musical Matilda. He has also been nominated for Tony Awards for his work on Matilda and Groundhog Day.

Not to be confused with Tin Machine.

Tropes embodied in his work include: