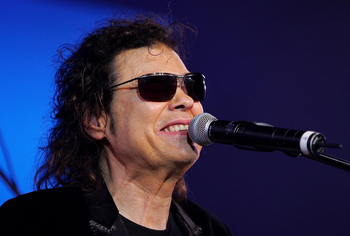 North Carolinian Ronnie Lee Milsap (born January 16, 1943) was born blind, but that didn't stop him from being a juggernaut of the Country Music scene in the 1970s and 1980s. In just under 25 years, he scored 35 number-one hits on the country music charts, including several major crossovers: "It Was Almost Like a Song", "Smoky Mountain Rain", "(There's) No Gettin' Over Me", "I Wouldn't Have Missed It for the World", "Any Day Now" and "Stranger in My House" all made top 40 on the pop and AC formats.
Advertisement:

He began his career in the 1960s doing music in more of a Soul-pop style, scoring a few minor hits. He also worked as a session musician, including some keyboard and backing vocal work for Elvis Presley. In 1973 he signed with RCA Records and switched to country, scoring a Breakthrough Hit with the next year with "Pure Love", written by the equally poppy Eddie Rabbitt, which became his first #1 hit on the country chart. From then until 1992, every single he released peaked no lower than #6 on the country charts, and almost every release between 1980 and 1984 got pop airplay as well. 1992's "All Is Fair in Love and War" broke the streak, and after that, he exited RCA Records and never had a hit again. Nonetheless, he continues to perform and record to this day. Many of his songs were co-written by former Cincinnati Bengals defensive lineman Mike Reid, who also sang a duet vocal on the 1988 hit "Old Folks".

Although his slick, keyboard-driven sound was more influenced by pop and R&B than mainstream country, he is still one of the genre's most influential and prolific artists. His accolades include six Grammy Awards, five of which were for Best Country Vocal Performance — Male. "Lost in the Fifties Tonight" won this honor twice. In 2014, he was announced as an inductee into the Country Music Hall of Fame.