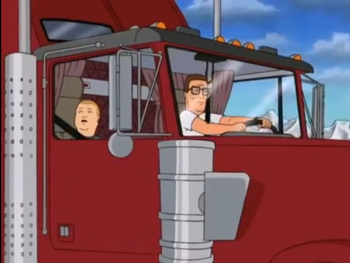 In the working world, there are people who want to do something more exciting to make ends meet. They don't want the fast food jobs, retail jobs or business jobs. They want something more exciting and adventurous. They want the opportunity to be their own bosses. They crave the life of the open road. These are the people who go get their Commercial Drivers License (CDL for short) and get behind the wheel of an 18-wheeler truck and trailer to transport goods around the country. These are the people that become truckers. The life of a trucker can be quite exhilarating. Going from city to city, state to state, seeing all the sights around the city, as well as meeting new and interesting people. And all in their own Big Badass Rig. While the job is a great way to see the country as well as the freedom of the open road, it too has its own drawbacks like any other career.

Like any other job, there are still deadlines to be met; to have the cargo get to its proper destination on time, so the driver can't really stop for too long to dilly-dally. On top of this, a trucking career is definitely a test of endurance, both within the driver and the vehicle. Driving in any type of vehicle requires sharp awareness of surroundings, and as one can imagine, being behind a vehicle for long periods of time can become mentally wearing. There's something called "white line fever", where drivers fall in the pattern of focusing on the lines of the road and following the trail as they need to go. Something that can be dangerous, as it causes the driver to lose focus of their surroundings. And being up for long periods of time put drivers at risk of falling asleep behind the wheel, more often than not having them trying to stay awake with coffee or caffeine pills, something that's quite ineffective as while the brain may still be awake, the awareness doesn't get any better as the one antidote for that is getting a good night's sleep. And driving in a big vehicle especially requires great care, as it can easily cause great damage if not careful. Drivers need to be gentle when making tight turns and leaving spaces for other vehicles. And that's not going into the dangers that ice road truckers go into.

On top of this, it can especially be a strain on drivers that have families. Being gone for days, weeks and sometimes months at a time can be hard on those who have spouses or children. While the drivers are out on the road, life goes on. They can miss important developments in their lives as they all grow up. The relationships can even deteriorate due to not being there in their lives. And in worse cases, the families can even grow apart and split up. On top of this, unless they have someone riding with them, such as a family member, friend or even a fellow trucker, it is often a job that can leave one very lonely. All of this is Truth in Television, as many a real life trucker can attest to. Additionally, for a long time truck driving was physically very demanding, before the introduction of power steering and semi-automatic or automatic gearboxes.

A Sister Trope to Road Trip Plot. Can definitely fall into New Job Episode plots. Unrelated to Truck Driver's Gear Change, although songs about trucking can certainly have it. Compare Space Trucker, which is Hard Truckin'... IN SPACE!!!