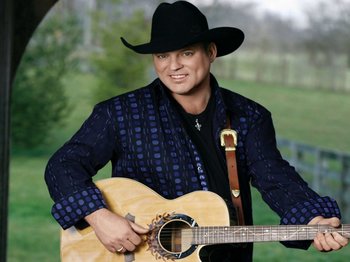 John Michael Montgomery (born January 20, 1965) is a Country Music singer who was highly popular in the first half of The '90s. Montgomery got his start in the band Early Tymz, which also featured his brother Eddie and their friend, Troy Gentry, who would later become the duo Montgomery Gentry.

John Michael started his career in 1992 with the Top 5 hit "Life's a Dance", followed immediately by the crossover ballad "I Love the Way You Love Me". In 1993, he scored an even bigger crossover with "I Swear", another ballad whose popularity was further fueled by a cover by the R&B group All-4-One. Montgomery spent the rest of the 90's charting Top 5 hits aplenty, although his momentum slowed some by 1999. He notched one more #1 in 2000 with "The Little Girl", based on an Urban Legend about a girl comforted by Jesus after witnessing her parents' death from Domestic Abuse. The country branch of his label, Atlantic Records, closed not long after that song's release, so he moved to Warner (Bros.) Records in 2001. He scored one more comeback hit in 2004 with the patriotic "Letters from Home", but once again faded from the limelight, outside a brief return in 2008 with the self-released Time Flies.

Montgomery's repertoire includes plenty of slick country-pop ballads such as "I Swear" and "I Can Love You Like That" (All-4-One also covered the latter), tempered with honky-tonk uptempos such as "Be My Baby Tonight" and "Sold (The Grundy County Auction Incident)."