The Picture Came with the Frame 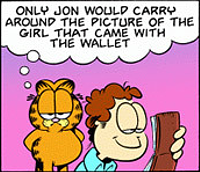 A person's family photos are revealed to be those that came with the frame (or wallet, photo album, anything meant to display photos). Something about the life they lead has turned out to be a lie. Perhaps it is a picture of their Girlfriend in Canada or the Stepford Smiler has gone crazy and made up a family for themselves.

Of course, people who pose as models for stock photos must have families so it's also an easy trope to logically play with.

Can be part of a Personal Effects Reveal.

For when the picture that came with a frame turns out to be a valuable work of art, see Priceless Paperweight.

A subtrope of The Reveal so Spoiler Warning.