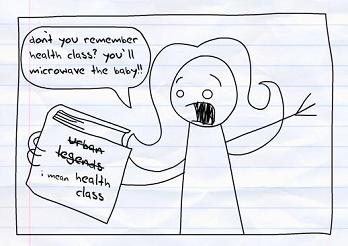 You can't make this stuff up.
"I have a friend of a friend who brought home a dog from Mexico, then he shaved it. It turns out someone had stolen its kidney and replaced it with a Polaroid picture of my toothbrush up Richard Gere's ass. Go figure!"
— Lewis Black
Advertisement:

An Urban Legend is a story which imparts information or An Aesop (explicit or implicit) and which purports to be the account of a true event which happened locally, fairly recently, and to someone the teller knows (often a "friend of a friend"). Even though the story is supposedly merely secondhand, it has usually been passed along through several sources and altered in the telling (to make it more 'local,' plausible, or what have you). Some, like folklorist Jan Brunvand or Snopes.com, collect these critters and try to evaluate their claims.

Urban legends are sensational by definition, which makes them attractive to audiences and enticing to the media. They show up most often as the Case of the Week on television Police Procedurals, though dramas or even sitcoms have been known to borrow a legend and make it come true for one of the main characters. There are a small but increasing number of shows dedicated to proving/disproving their basis in reality; the most popular of these is MythBusters, followed closely by the cable series Penn & Teller: Bullshit!. Newspapers also pick up urban legends as filler articles; you can recognize them as stories that sound too weird to be true and surprisingly vague in the details (no names given for the people involved, for example). Yet even factual details are no guarantee of a true account: any Snopes article will show that the names, dates and locations frequently get changed to protect the non-existent.

The moral of an urban legend often employs a bit of Scare 'Em Straight, to drive the lesson home or merely for the sake of humor (The Cabbage Patch Kids one, for example, was a joke). After all, these legends won't get passed along if no one wants to retell them. This is not to say that urban legends are all pure fiction. The most convincing of them contain a grain of truth (i.e. a less interesting but factual story) which becomes sensationalized or completely distorted to bring the message a bit closer to home. Instead of some unknown Alice suffering bizarre consequences after a cocaine overdose, it was Drew Barrymore. Instead of the gruesome murder occurring in a far away country, it coincidentally happened right here, not far from where you live, and the Bad Guys who did it are people who aren't like us (foreigners, people of different races or cultures, junkies, celebrities, criminals...)

Needless to say, urban legends make just as free with the message at the heart of the tale as they do with the facts of the story, so expect Broken Aesops, Fantastic Aesops, and all sorts of Values Dissonance; not to mention Gossip Evolution.

See also Oral Tradition. If you were looking for the film by this name, look right here. For In-Universe urban legends about a specific person, see Shrouded in Myth.

Magic, occultism, and the supernatural