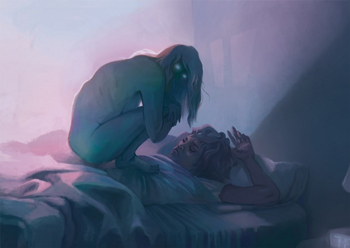 "These hallucinations — often involving seeing and sensing ghostly bedroom intruders — are interpreted differently around the world. In Egypt, sleep paralysis is often thought to be caused by a jinn ("genie") — a supernatural creature that terrorizes and sometimes kills its victims. In Italy, some interpret sleep paralysis as an assault by the so-called Pandafeche, a figure described as a malevolent witch or terrifying giant cat. In South Africa, Indigenous people believe the state to be caused by segatelelo (black magic), involving menacing dwarflike creatures called tokoloshe, and in Turkey, it is the karabasan — mysterious spirit-like creatures."
— Scientific American

is a sleep phenomenon and a form of muscular paralysis in which a person wakes up conscious and aware of their surroundings, but unable to move or to speak for a couple of minutes. It is believed (although there are other theories) to involve a dysfunction in the dream phase of sleep when the brain makes the body stay still so one doesn't move when dreaming — and thus reducing the chances of the person getting hurt. If one suddenly wakes up during this phase, for example, they might be relatively conscious, but still temporarily unable to move, in a state between wakefulness and the REM period of sleep; as they still are in a dream-like state, the person may also suffer from hallucinations, panic, breath shortage and sometimes a feeling of pressure or pain in the chest. Because of these factors, many people who experience sleep paralysis report feeling there was a shadowy ghostly intruder in the room with them, either in the corner of the bedroom, in the dark hallway, on the foot of the bed, or on their chest, sometimes suffocating them and making them unable to move or scream for help, as if they had been trapped in their own body. It might lead to lucid dreaming.

With all these characteristics, this phenomenon has been interpreted as being caused by supernatural malevolent spirits — frequently called Night Hags or Old Hags in English — in many different cultures in world folklore since ancient times, often with them possessing the person or sitting on their victim's chest or on the foot of the bed and immobilizing them as they give them nightmares. In Oral Tradition, they can be hags, goblins, demons, imps, ghosts and revenants of dead people, House Fey and overall other supernatural beings and fae-like entities. More recently, they have also been associated with Alien Abductions and encounters. Circumstances can range from a form of communication with the material world, a mischievous prank, or a sadistic and even lethal torment, but the experience is almost always quite unpleasant for the person regardless.

In fact, the English word "nightmare" comes from the Old English "mare" — which in turn comes from the Proto-Germanic "maron" — folkloric goblins or demons who would plague people by causing this experience at night. This holds especially true for the Danish and Norwegian languages, whose words for "nightmare" are respectively "mareridt" and "mareritt", lit. translation: "to be ridden by a mare", which directly invokes the image of the creature sitting on one's chest. A similar process happened with "pesadelo" and "pesadilla" ("nightmare" in Portuguese and Spanish, respectively), which comes from "pesado" (heavy), in reference to the feeling of pressure in the chest during this ocurrance.

Compare Nightmare Weaver, a common role for this kind of folkloric beings, and Things That Go "Bump" in the Night, for other sinister nightmarish monsters lurking around the house at night. Many instances of them don't even have them pose active threats, just putting their helpless prey at unease.