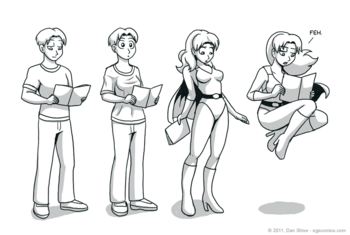 Becoming a Super Gender-Bender doesn't faze Justin.
Robo: Overall, I gotta say, you're taking this rather well.
Carl Sagan: Astronomy is a long and relentless lesson that the universe is under no obligation to match up with your expectations. Also, the alcohol helps.
— Atomic Robo and the Shadow from Beyond Time
Advertisement:

Take a person. Something fantastic happens to or around them. He or she acknowledges that something as supernatural or as something that should be impossible, but, when people expect them to freak out, they don't. It turns out that the person in question utterly fails to react with the sense of wonder that something fantastic, unnatural or supposedly impossible would entail. This usually happens for one of two reasons:

In the first case, the person is more likely to berate others for their overreaction, though not always. In the second case, the person already reacted strongly to this kind of thing a few times, if only offscreen, so they won't really mind when others do. Mind that the person does know the event is impressive or surprising - they're just too calm or too used to it to really mind. Superheroes that work in teams depend on this trope not to stare wide-eyed in the middle of a battle whenever a teammate does something.

This trope can often be used for comedic purposes, especially when paired with another character who is anything but indifferent and more than ready to point out how strange or fantastic the situation is, and react with incredulity at the calmness of the other person/people.

Most of the time people shrug when this magenta-haired, three-foot tall man magically appears in an explosion of glitter and gives them Diet Dr. Pepper.

Most of the time people shrug when this magenta-haired, three-foot tall man magically appears in an explosion of glitter and gives them Diet Dr. Pepper.