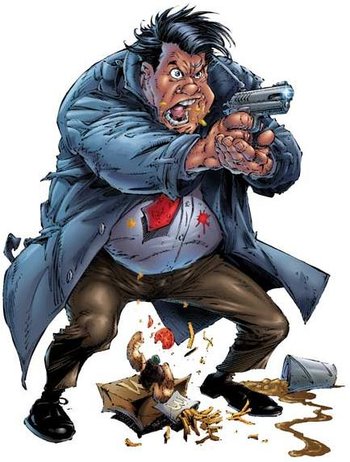 Sick bastard made me drop my donut!
Advertisement:

Chances are, being fat in fiction means you're a disgusting slob who leaves food crumbs everywhere, kicks your feet up on the table and treat the place like a low-budget buffet, talk while eating, and have food flying out of your (greasy) clothing.

Generally played as Always Male, though female examples can exist.

Folks like this are usually bad guys, but not always. If they're on the good guys' side, however, it's almost always a case of Good Is Not Nice. Most guys like this are incompetent and lazy, but not all of them; a few Genius Slobs and Acrofatic types may be included. If taken to sufficient extremes of creepiness, some examples may even end up Ambiguously Human.

It is perhaps worth noting that there is some Truth in Television to this trope. Unlike muscle, fat is extra mass that does not help you move. It adds to your inertia and reduces your agility. The more massive you are, the more difficult it is to perform delicate tasks, such as, say, eating neatly. Needless to say, depictions of this trope are nuanced and complicated.

For more stereotypical behaviors of the obese, compare and contrast Fat Bastard, Fat Idiot, Jabba Table Manners and Fat, Sweaty Southerner in a White Suit. Contrast Big Beautiful Woman and Big Beautiful Man, who are fat and attractive in spite (or because) of their girth. Another positive contrast is Big Fun, for people who are hefty, yet portrayed as chipper and friendly.