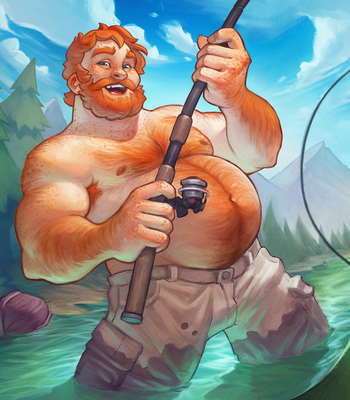 Rocking that dad bod.
"Eustace, let me make one thing clear: I like a gentleman of heft. Beef and beer lend a man weight".
— Erin Winters, Bobbins
Advertisement:

A Big Beautiful Man is noticeably chubby, and perhaps even obese, and yet considered genuinely beautiful and voluptuous for it.

This trope was more common centuries ago, when having some extra body fat meant people were seen as healthier (as opposed to typically malnourished masses), and was also a sign of affluence. People could truly be Fat and Proud. It has become more of a Forgotten Trope over time as most societies have themselves become more affluent and have access to more and healthier varieties of food. Such large-set people are not as usually considered as attractive by today's audience or in today's works, where they would more likely be considered Fat Slobs for their girth.

But while this is mostly true for women, it becomes a Double Standard with men. The sheer size of the Ugly Guy, Hot Wife page shows that Hollywood is more likely to let a fat man attract a lover with his personality and sense of humor. note  Or perhaps his social standing or wealth? But per Rule of Funny, their beauty in another character's eyes is usually an Informed Attractiveness that doesn't even pretend to try to resonate with the audience.

A very notable exception is in works that appeal to gay men. On one hand, chubby men are not always considered attractive in the gay community, especially in contexts where The Twink or the Bishōnen are considered the more marketable standard of beauty (ie, the majority of Western and Japanese works featuring gay men), and the rule of Hollywood Pudgy is in full force. But on the other hand, there is a sizable niche interest that finds them sexy and even Moe — these people are termed (for better or for worse) "chubby chasers". Among these include The Bear community, where body hair is the chief point of attractiveness, but most sexy chubbiness is also usually the order of the day. If the character is middle-aged or older, don't be surprised if he was The Twink in his younger years.

The trope can also still be Played for Laughs when a chubby character sees himself as a Big Beautiful Man. Even then, it still often manages to come off as gay-for-oneself.

LGBT Fanbase often gives Big Beautiful Man status to characters that were not (specifically) intended as such. This can apply to practically any chubby character. Even Santa Claus is not immune.

The Spear Counterpart of Big Beautiful Woman. Big Beautiful Man can overlap to some degree with Acrofatic, Bara, The Bear, Big Fun, The Big Guy, Charles Atlas Super Power, Fat and Proud, Hollywood Pudgy and Stout Strength. In fact, this trope overlaps with The Bear so often that some people consider them the same trope — except that technically this trope is about body fat and the other trope is about body hair.