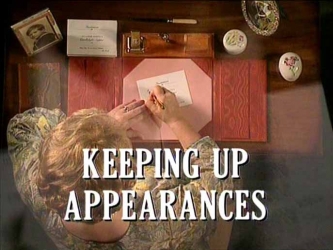 The show revolves around Hyacinth Bucket (apparently pronounced 'Bouquet', as she's often heard correcting people), social climber extraordinaire. Snobby, shallow, and blissfully unaware of how annoying she is, Hyacinth is desperately worried that she isn't upper-class enough. Which, considering her family (Rose, Onslow, and Daisy), she definitely isn't.

Obsessed with improving and showing off her social status, Hyacinth routinely rides roughshod over everyone unlucky enough to know her, assuming they are an admiring chorus who will do whatever she wants. Her Henpecked Husband, Richard, is long-suffering verging on sainthood. Also frequently roped into her schemes are her patient but timid neighbour Elizabeth, who is prone to dropping Hyacinth's expensive crockery, Elizabeth's composer brother Emmett, who cannot stand Hyacinth, especially when she sings at him, as well as the local vicar and his wife. No matter how firmly they tell her "No," she only hears "Yes, my lady." She's also blind to the abundant evidence that her son is anything other than her idea of perfect. Her numerous schemes are often scuttled by her own lack of intelligent thought and planning as well her increasingly panicked desperation whenever she loses control.

Astonishingly, Patricia Routledge manages to present Hyacinth as a sympathetic and sometimes pitiable figure while still keeping her hilariously insufferable.

Hyacinth's sisters, Daisy and Rose, are both much lower class, living in a council house with a junked car (and resident dog) permanently parked in their front garden. Their car stutters and belches out black smoke. Daisy is a down-to-earth type rather in awe of Hyacinth's pretensions; Rose is the local Hard-Drinking Party Girl whose sex-life provides much of the incidental comedy — especially her crush on Hyacinth's (very married) parish vicar. Daisy's husband, Onslow, is a stereotypical Fat Slob who is perennially unemployed and completely ignores his wife's amorous advances, though there are hints that he is in fact very intelligent, in comic contrast to Hyacinth. He has a sort of survivor's bond with Richard, whom he occasionally tries to "rescue." The sisters' senile and lecherous elderly father ("Daddy"), who is still fighting the Second World War, also lives with Daisy and Rose, and regularly causes havoc with his antics.

Hyacinth has another sister Violet who, in contrast to Daisy and Rose, is very wealthy. Hyacinth even boasts about her to guests when she is on the telephone with her ("It's my sister Violet! She's the one with the Mercedes, sauna, and room for a pony!") Despite this, Hyacinth tries to keep at bay the cross-dressing, prostitute-hiring antics of Violet's turf accountant (i.e., bookmaker) husband Bruce. At first an unseen character for most of the show, Violet physically appears a number of times in the last series.

As well as running gags, the series employs a more subtle sliding scale to wealth, social status, and marital happiness - the poorest and unmarried sister, Rose, seems to be the happiest and also has the most active sex life. Daisy and Onslow seem to have a happy enough marriage despite their lack of social standing. Hyacinth and Richard are middle-class, with a testy but caring relationship. And Violet and Bruce are the most wealthy, but have a terrible marriage. Similarly, the three husbands have a sliding scale of laziness, with Onslow the worst, then Richard, who blithely accepts his wife's decisions without protest, while Bruce works very hard, if only to buy nice dresses for himself.

The Bucket residence - the lady of the tropes speaking!