Tied Up on the Phone 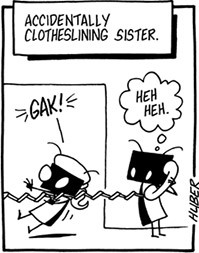 An old telephone with a cord for the receiver is a dangerous object! Especially in fiction, when a) that cord can be absurdly long for no practical reason, and b) characters are easily distracted and ignorant of the world around them when they become engrossed in the phone conversation.

This results in the phone user, or more often the people around them, finding themselves caught in a messy web of tangled phone cord quite easily. Can occur if the character likes to Walk and Talk, slowly encasing themselves and any innocent bystanders as the conversation goes on. Of course, they could just as easily fall into the phone, and if a villain is short on rope a phone cord is the surprisingly popular alternative to tie up or strangle a victim.

Sadly, Technology Marches On, and the advent of cordless phones and cellphones are the Trope Breaker for this trope. This can also add to the trope though; if a character is used to using cellphones and has to rely on an old phone in an old building etc, they would invariably struggle with an unexpected cord.