Nobody Here but Us Statues 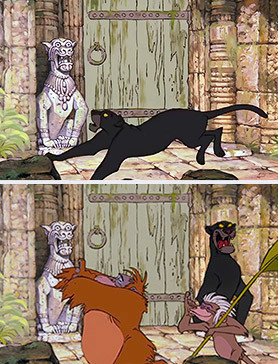 Good thing there was a conveniently-placed spot next to an actual statue!
"I have mastered the ability of standing so incredibly still that I become invisible to the eye."
— Drax the Destroyer, Avengers: Infinity War
Advertisement:

Alice tries to hide from Bob, so she pretends to be a statue (or, in more cartoonish settings, even a painting or a relief) in a museum, art gallery etc. Sometimes she has to Walk Like an Egyptian to fit in, or end up holding an empty picture frame in front of herself. Bob typically doesn't catch on, though he looks at Alice suspiciously. (Bonus points if he says "I'll never understand this modern art" or "What an ugly statue!")

Sometimes Alice will accidentally reveal herself, typically by sneezing, or in worst-case scenarios, Bob will sneeze and she will respond "gesundheit". Often Bob will pass Alice obliviously the first time, only to stop a few seconds later and run back; either they will have an awkward pause before she runs away and he chases her, or Bob will find that Alice has vanished.

Attempting to pass as a doll or a department store mannequin is a variant on this trope, particularly in big front-window displays.

Compare Mobile Shrubbery, Stand-In Portrait, Knight's Armor Hideout and Wallpaper Camouflage, as well as Mistaken for Exhibit. Contrast Mistaken for Granite, where an actual statue turns out to be mobile.

The Shy Guy pretends to be part of a sign warning people about Shy Guys.

The Shy Guy pretends to be part of a sign warning people about Shy Guys.