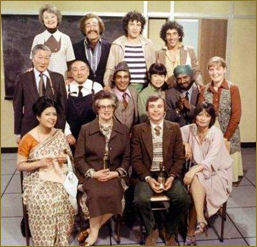 Mind Your Language was a politically incorrect Brit Com that ran for four series, three on London Weekend Television between 1977 and 1979 and one on Granada in 1986. The show was about a hapless class of students learning English as a foreign language. It has been much criticized for its xenophobic outlook and heavy use of ethnic stereotypes, but at the time it was appreciated that the show gave actors of colour a bigger presence on TV. Hilariously, it was outsourced abroad to great acclaim. To this day it is still re-run on Comedy Central in India and elsewhere.

In the first episode, Jeremy Brown (Barry Evans) is hired as a teacher of English as a foreign language at a college of adult education run by strict principal Miss Courtney (Zara Nutley). Other college employees include Cockney caretaker Sid (Tommy Godfrey), and gossip-loving tea lady Gladys (Iris Sadler). The other episodes focus on Jeremy's hit-and-miss attempts to help his internationally diverse class of students navigate the mazes of the English language and British culture.

Despite drawing audiences of 18 million, the series had its plug pulled by then-LWT Director of Programmes Michael Grade in 1979 in response to complaints about the use of ethnic stereotypes, but it was revived in 1986 for a fourth series of 13 episodes. The characters of Jeremy, Miss Courtney, Giovanni, Anna, Juan, and Ranjeet all returned, as did Ingrid after having been absent for the third series. New characters included Max's sister Maria Papandrious (Jenny Lee Wright), French student Michelle Dumas (Marie-Elise Grepne), Indian student Farrukh Azzam (Raj Patel), Chinese student Fu Wong Chang (Vincent Wong), tea lady Rita (Sue Bond), and caretaker Henshawe (Harry Littlewood).

The series was adapted in many countries, including (unsuccessfully) in the US as What a Country, starring Yakov Smirnoff.

Any resemblance between this and Leo Rosten's phenomenally popular "Mr. K*A*P*L*A*N" short storiesnote originally run in The New Yorker in the 1930s, they featured a night school where immigrants from every corner of the globe, each with their own unique personality and way of speaking, learn English and civics in preparation for citizenship. Malapropers and Fun with Foreign Languages abound is purely coincidental.