Nobody Here but Us Birds 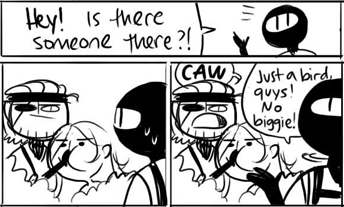 This is actually the third time it works.
Dodoria: Hm? What was that?
Krillin: Um... Quack!
Dodoria: Oh, it's just a space duck.
—Dragon Ball Z Abridged
Advertisement:

When a character in fiction makes an animal call, which is typically that of a bird. When a character makes a bird call, expect it to be for one of two purposes, neither of which are for animal reasons:

Seldom played straight anymore, as it's very easy to use for humor; typically, it will be either be for parody (the caller definitely does not sound like a bird, but it works anyway) or deconstruction (the bird call is out of place for the time or location, and the position is given away). Not to be confused with Nobody Here but Us Statues, which is similar to but involves hiding in plain sight.

Used as a signal

Used to pass for an animal

In order to hide from the Kids, the Eds pretend to be a cow, though Ed nearly flubs it.

In order to hide from the Kids, the Eds pretend to be a cow, though Ed nearly flubs it.