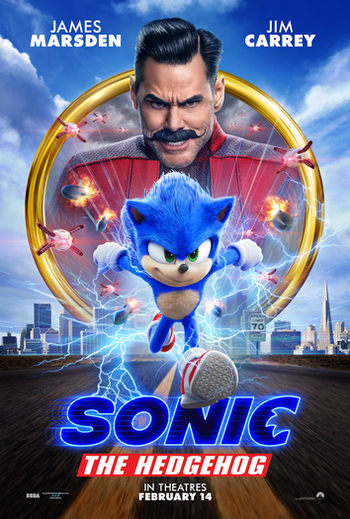 A whole new speed of hero.
"So, I know what you're thinking: 'Why is that incredibly handsome hedgehog being chased by a madman with a mustache from the Civil War?' Well, to be honest, it feels like I've been running my whole life. Is this too much? Am I going too fast? It's kinda what I do. You know what? Let's back up. (mimics reverse audio)"
— Sonic
Advertisement:

After 29 long years, Sega's Mascot with Attitude speeds his way into theaters in this theatrical debut for the eponymous video game franchise.

A co-production of Sega and Paramount Pictures, this film is directed by Jeff Fowler in his directorial debut and is produced by The Fast and the Furious' Neal Moritz in the latter's first film with Paramount after leaving Sony Pictures (this film's original studio). Tim Miller also serves as executive producer. The film's animation services and visual effects are provided by Sega's Marza Animation Planet studio and Miller's Blur Studio, the latter of whom have collaborated with Sega on a couple of Sonic the Hedgehog video games, namely Shadow the Hedgehog and Sonic the Hedgehog (2006), with assistance from Moving Picture Company, Trixter Studio, and Digital Domain.

Sonic (voiced by Ben Schwartz), a bipedal hedgehog constantly hunted down on his own world/dimension because of his special powers, escapes to planet Earth with his special rings and stumbles upon the small town of Green Hills, Montana, where he's spent over a decade in hiding. After Sonic inadvertently causes an EMP blast that knocks out power across the Pacific Northwest, the military hires a Mad Scientist, Dr. Ivo “Eggman” Robotnik (Jim Carrey), to track down the source of the disruption. Upon discovering Sonic's immense power, Robotnik will stop at nothing to capture and dissect him to find out its source. The town's sheriff, Tom Wachowski (James Marsden), who aspires to move to San Francisco for a top police job there, reluctantly agrees to help Sonic find his lost rings to escape the planet. But with Robotnik and the military after him, time is of the essence and both Sonic and Tom need to retrieve the rings before Robotnik catches up to them.

A couple attempts were made back in The '90s to bring the property into the silver screen, but never came to fruition. It wasn't until 2013 when Sony acquired the film rights to the franchise and began production on the feature-length live-action/CGI hybrid film. However, thanks to the executive shakeup following the studio's devastating cyberattack, no one had interest making the film anymore, and after a financing partner backed out of its deal with Sony, the studio shut down production in the summer of 2017 and placed it in turnaround, forcing Moritz to shop the movie elsewhere. When Moritz moved his first-look production deal from Sony to Paramount around that same time frame, Paramount showed interest in the movie and acquired the rights from Sony, finally getting production off the ground.

The film was originally set for release in November 2019, but was later delayed to February 2020 to overhaul the design for Sonic after his original design received massive backlash. The well received redesign was developed by illustrator Tyson Hesse, notable for working on Sonic ventures such as Sonic: Mega Drive and Sonic Mania Adventures.note The original design would later appear as a character in its own right in Chip 'n Dale: Rescue Rangers (2022).

A sequel was confirmed a few months later in May 2020, with Moritz, Miller, Fowler, writers Pat Casey and Josh Miller (no relation to Tim), Marsden, Carrey and Schwartz all confirmed to return, and featuring Idris Elba as Knuckles the Echidna along with Colleen O'Shaughnessey reprising her role as Miles "Tails" Prower from the games. Titled simply Sonic the Hedgehog 2, it released on March 30, 2022 in Europe and on April 8 in the US. You can see the first teaser here

, with the official trailer here

On February 15, 2022, two months ahead of the sequel film, Paramount announced that they are developing a second sequel as well as a live-action series focusing on Knuckles the Echidna, with Elba returning to the role, set for release on Paramount+ in 2023. On March 28, 11 days ahead of the release, producer Toby Ascher has stated

that further projects in what will become the Sonic Cinematic Universe are in development.

For the other Sonic movienote which was originally a two-part pilot episode for an OVA edited together into a mini-feature for its US release, see Sonic the Hedgehog: The Movie.

(with the original design), Trailer 2

(with the revised design)

open/close all folders
Tropes A-G
Tropes H-Z
♫ So I run (Yeah, yeah), keep me up
Creep on me, they speak on me
They slow down when they bring me up like
(huh)
Speed me up (Speed, yeah). ♫
Feedback

"That's not your child?"

In an attempt to sneak Sonic into the TransAmerica building, a police officer and his wife smuggle the hedgehog in a bag. Unfortunately, the bystanders mistake this for a child abduction.

"That's not your child?"

In an attempt to sneak Sonic into the TransAmerica building, a police officer and his wife smuggle the hedgehog in a bag. Unfortunately, the bystanders mistake this for a child abduction.