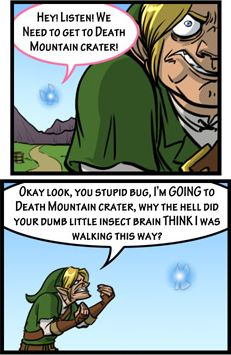 You don't know what you've got 'til it's gone.

"I don't really mind the owl, but I find it a bit strange that we never discover a shred of information about who or what he is, or why he would want to help Link. Considering how much of a blank slate it is, I like to imagine that it's Shigsy himself speaking to me directly, bit like a overprotective father. He wants to let you have a good time, but he's gonna make damn sure that you know where the item sub-screen is, just in case."note He's actually Rauru, the Sage of Light
— Matthewmatosis

on The Legend of Zelda: Ocarina of Time
Advertisement:

"Help" is a relative thing.

The character that has you screaming "Stop helping me!" is usually an Exposition Fairy who either has an attitude problem or interrupts when you really wish they wouldn't. Sometimes it's a party member who's a master of the Useless Useful Spell — or who keeps getting overexcited and killing you with friendly fire. In extreme cases, it's the character the player is controlling, if they're annoying/inept enough; stupid catchphrases and idiotic behavior during cutscenes have resulted in many a player wasting a life by directing their playing character off a cliff, just for revenge.

Unfortunately, these annoyances are never disposable characters. You're stuck with them for the entirety of the game. The best you can hope for is that they do a Face–Heel Turn and become the bad guy's problem. In fact, sending them to the opposite faction might be a good tactical maneuver on your part. However, in that instance, Finagle's Law will kick in and they'll be just as effective fighting against you as they were ineffective fighting for you. C'est la vie. At least you don't have to listen to their voice constantly and you finally have that excuse to kill them that you've been waiting all game for.

In fact, most "guide" characters will try the player's patience if they've played the game through a couple of times — like the tutorial levels, they're not really needed after the first playthrough. And maybe not even then. Smarter game designers will give players the option of turning the character "off" when the player doesn't want their help, or the guide only helping when the player specifically asks him or her to.

This should go without saying, but try to avoid sticking AI sidekicks in here that are simply not perfect. If they can pull their own weight in a fight, but have different priorities and thresholds for doing things than a player might, then they probably don't belong here. (Complaining that the computer is trying to use its healing items on you earlier than you necessarily want it to, for example, does not make them this trope, especially in a game without a Hyperspace Arsenal.)

Compare The Millstone, where the unhelpful "helper" is the cause of difficulties that directly affect the plot. When the "helper" is an intentionally unhelpful or confusing Mission Control, it's Mission Control Is Off Its Meds. Contrast to Helpful Mook, where the enemy is genuinely helpful. Also related to Continue Your Mission, Dammit!, where the game will nag the player to continue even if there's not an actual need to hurry, like in a Timed Mission.

You can then choose to either go after them or not, and given how far away you have to drive to get them, a lot of players don't find the monetary award worth it, so these calls become especially annoying.

Link gets annoyed by Fi's assistance.

Link gets annoyed by Fi's assistance.