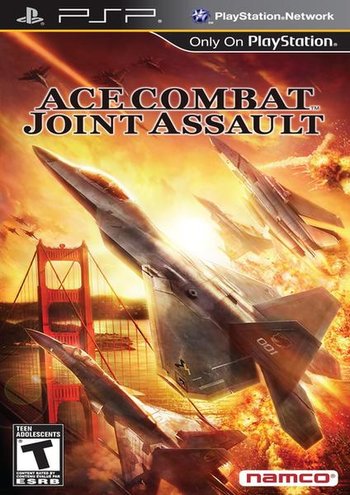 Ace Combat: Joint Assault (also known as Ace Combat X2: Joint Assault in Japan) is the eleventh game in the Ace Combat series and the first one to be set on our familiar Earth, rather than the Constructed World of Strangereal. Released in 2010.

It was the third Ace Combat game made by an external developer (Access Games, although Project Aces assist with the development).

The year is some unspecified number in 20XX, some years after the 2007-2008 Global Financial Crisis.note The European version mentions that the game takes place between late 2010 to early 2011. It is your first day on the job as Antares One, a rookie pilot in the private military company, Martinez Security. The company is hired to participate in a joint exercise between the American 7th Fleet and the Japanese Self-Defense Force but is waylaid by fighter planes from a terrorist group calling themselves the Valahia.

The Valahia proceed to attack Tokyo, followed by one of their Orgoi flying fortresses, as a prelude to declaring war against the entire world. Meanwhile, Martinez Security aligns with the nations of the world to form the International Union Peacekeeping Force (IUPF) with Antares One leading the charge.