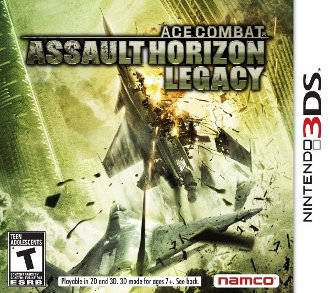 The thirteenth game in the Ace Combat series—despite the name, Assault Horizon Legacy (known in Japan as 3D Cross Rumble) is a return to the world of Strangereal and an updated remake of Ace Combat 2 for the Nintendo 3DS, putting the player back in the flight suit of the leader of the Special Tactical Fighter Squadron "Scarface," who now has his own callsign—Phoenix.

The plot for Assault Horizon Legacy expands upon that of Ace Combat 2 to more neatly fit into the Strangereal timeline. Here, the reason for the Usean Rebellion of 1998 is rooted in the aftermath of the Belkan War just three years prior in 1995; the nations of the Usean continent—who have a long history of political and military conflicts amongst themselves—banded together to form the USEA Allied Forces in response to the threat posed by two growing superpowers, the Osean Federation and the Union of Yuktobania Republics, who became allies after defeating Belka together and ending their own Cold War.

However, a group of southern Usean nations preferred an alliance with Osea, even offering to join the Osean Federation as full member states of the superpower. The Federal Republic of Erusea, the Republic of North Point and other nations in Northern and Western Usea protested this; they resented the idea of Osean military presence and feared that Osea would take USEA's natural resources for itself, but the southern nations negotiated a military pact with Osea anyway.

On the day that the USEA Allied Forces were to formally sign a treaty with Osea, conservative extremists organized a continent-wide coup d'etat, headquartered in the nothern capital of St. Ark. Many Allied Forces units joined the rebellion, warring on their former comrades. With fears that the rebellion would successfully take over the Federation of Central Usea (FCU) government, the faltering Allied Forces launch Operation Fighter's Honor, assembling the 37th Air Force 18th Fighter Wing 9th Special Tactical Fighter Squadron, "Scarface." Leading the charge is Scarface One, TAC Name "Phoenix."

Oh, and we can't forget the music.

Be sure to check out the character sheet as well.