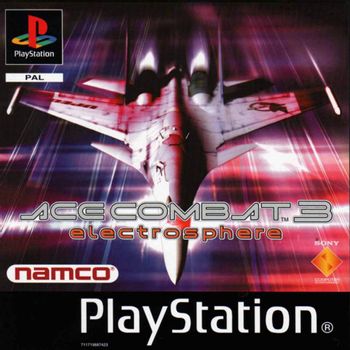 "Forget everything you've done until now, and with your own eyes, understand the truth of this world."
"Becoming a pilot like I have feels enough like a dream to me. But, recently... I've been thinking—that if the body is nothing more than a container for the mind, then it doesn't actually mean anything to me. I only use my mind when I fly. My body didn't come with wings, but my mind does... and it gave me the sky."
— Rena Hirose
Advertisement:

The third game in the Ace Combat series, released in 1999, and the last to have been developed for the original PlayStation.

The world is Strangereal, a not-Earth from the previous games that was first fleshed out in this installment. The year is 2040. In the past few decades, the national governments of Strangereal have decayed beyond repair and were replaced by a global rule of Mega-Corps, chief among whom are General Resource Limited and Neucom Incorporated. Naturally, the two companies' competition for power is far from friendly, and the only thing standing between them and an all-out war is the Universal Peace Enforcement Organization. Further upsetting the fragile balance of power are: the GR's latest Super Prototype fighter jet, the Night Raven, and its groomed pilot, the sickly Rena Hirose; the Neucom scientists' questionable experiments on the recently discovered Cyberspace and Brain Uploading; an overzealous military commander's schemes; and a Nebulous Criminal Conspiracy lurking in the background and pulling every string.

You fly as Nemo, a nameless (in more than just callsign) and initially unknown UPEO pilot, and become entangled in a complex plot that borrows heavily from the Cyberpunk genre and stars a diverse cast of pilots, scientists, and politicians. With frequently branching storylines, five distinct endings, and one massive wham in the epilogue, Electrosphere is a tale of loyalty, betrayal, revenge, transhumanism, scientific ethics, Family Drama, and social critique, fondly remembered as the definitive highpoint of the Ace Combat series. All with top-notch animated cutscenes and interludes courtesy of Production I.G.

...unless, of course, you live in the insignificantly tiny portion of the world that is not Japan, for which the story was remade into a lone pilot working for the UPEO, trying to keep the peace between General Resource and Neuwork. Bandai Namco Entertainment currently has no plans to deliver the original Electrosphere to the outside world, but the release of a remake of Ace Combat 2 for N3DS gives us a faint glimmer of hope. Don't hold your breath, though. In the meantime, a fan-driven Project

Despite the game having never been officially translated into English, it was the seminal installment of the series that codified its setting and most of the associated gameplay tropes (the honor that usually goes to Ace Combat 04 in the West). It has been said that ever since 1999, the AC series has been slowly working its way back up to Electrosphere (all following Strangereal games were technically prequels to it), but never quite achieving the same level of expansiveness, plot intricacy, and gameplay finesse.

"This time, the story won't be pre-determined like the others. Let's start the game."