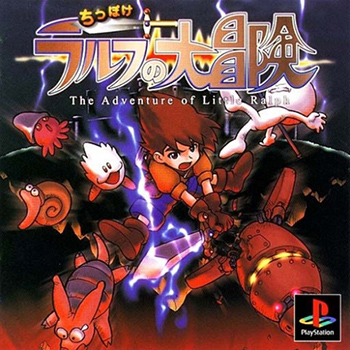 Chippoke Ralph no Daibouken (Little Ralph's Big Adventure), officially called in English as The Adventure of Little Ralph, is a little-known PlayStation 2D platformer published only in Japan in 1999. The game's protagonist, Ralph, starts out as a grown man, but is turned into a child by the Big Bad named Valgo. For most of the game, Ralph stays a child, except for every boss fight after the midboss, in which the gameplay changes to that of a fighting game.

The game's most unique factor is its graphics, as the game is one of the few 2D platformers released in The Fifth Generation of Console Video Games. Most developers stressed the 3D capabilities of the 5th-gen consoles, so 2D was shunned, for the most part, until The Sixth Generation of Console Video Games, when "retro" gaming started to rise in popularity. In fact, The Adventure of Little Ralph could be the first Retraux video game, given that it was designed as a 16-bit platformer but was released during a time when 16-bit was seen as obsolete. Possibly due to the game's lack of appeal because of this supposed obsolescence, the game was never localized for international markets, and it languished in obscurity, known only by niche retro gaming sites, until very recently, when major game journalism sites played and reviewed the game.