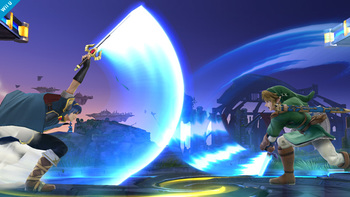 Luminescent lines or gradients added by artists and animators to illustrate the speed and movement of a really fast swipe of a weapon. Only appearing occasionally in 2D games, they have become virtually ubiquitous during the 3D era.

Note that Sword Lines aren't just limited to swords, or even bladed weapons for that matter. Axes, sabres, staffs, clubs, punches, kicks, and even arrows have a high tendency to leave behind conspicuous lines which portray their path. Somewhat justified with Laser Blades. While obviously cool-looking, Sword Lines can be helpful in giving players a visual indicator of the sword's range.

Arguably Truth in Television: Due to persistence of vision, after a sword is swung you can often see an arc.

A form of Motion Blur. Compare with Sword Sparks. See also Sword Beam, in which the lines are turned into a deadly ranged attack. For guns that have this effect, see Every Bullet Is a Tracer. For when only the sword lines are shown in a possible Gory Discretion Shot, see The Hit Flash.