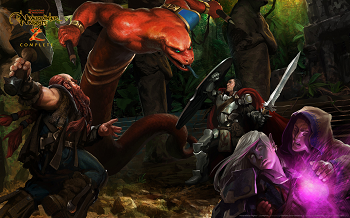 Daerred: Now, I know you didn't have any jobs for an adventurer last time in Neverwinter. But we searched the city for opportunities. After that we took to the road, and I found an old lady and rescued a cat. We each got an apple.
Khelgar: Aye... well, I guess you have to start somewhere.
Sand: I'm sure this old woman was as delighted by your actions as we are.
Shandra: Well, if it had been the Captain doing it, the cat would be lost, the tree burned down, and the old lady would be traveling with us now.
Advertisement: