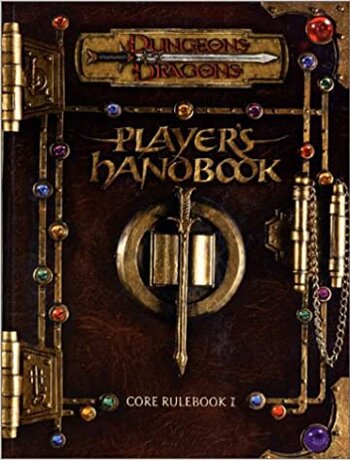 Dungeons & Dragons (3rd Edition) (2000 - 2003) made major simplifications to the rules of Dungeons & Dragons by using the d20 System (which was originally created specifically for D&D 3.0) based on roll-over used in Gamma World long ago. The simplification was comprehensive enough to mean that nearly all character actions will fall into one of three areas — combat, skills, and magic. This means that 3rd edition is also more flexible than 2nd; skills and abilities are more universal, with every class being able to attempt actions like "bluff" or "hide", whereas only specific classes had access to them before.

This time the Character Class System dominates the weaker race system and for powerful and unusual creatures what was racial HD is treated as "class". The standard level limit was set at 20 (higher levels were covered in the Epic Level Handbook), again without racial restrictions of any kind, although each race had a "favored class" that factored into multiclassing. The previous, crufty system of "weapon proficiency slots" was revamped into a somewhat-less-crufty system of Feats. Overall, the game became a lot simpler to use without losing very much of its depth. In addition, much of the material thrown out in 2nd edition — half-orcs, monks, battles with demons, and so on, were added back in (some in the core rulebooks, others in supplements).

The most obvious flaws: indecisive unification note Such as class feature "skill works differently" — e.g. out-of-table Rogue abilities to deal with difficult and magic traps. Or prestige classes awkwardly referring to the base class — like with "+1 to existing spellcasting class" or "we don't say, Druid, we say requires Wild Shape... which has nothing to do with the class"., skill rank inflation, feats handled separately without any common meaning to themnote Complete Scoundrel later tried to abate two latter problems at once with "skill tricks

Dungeons & Dragons (3.5 edition) (2003 - 2007) was an effort to rebalance and fix up 3rd edition. It consisted of lots of little fixes and additional content while trying not to render obsolete what came before. However, the gradual shift from attempts to model the game world to an abstract "chess rules balance" approach becomes rather obvious. Individual settings are routinely treated much more invasively at this point, starting with "how to shoehorn this into X" advice on everything. This was also the most recent edition at the time of this website's creations, so a lot of D&D references on this site are talking about this edition.