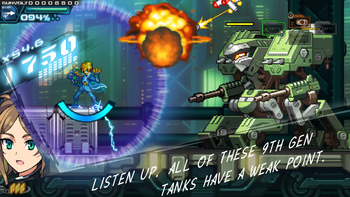 Well why didn't you say so!?
Advertisement:

For the longest time, video games told stories only through dialog that would occur either during cutscenes, or when you walked up to a person and hit the button to talk to them.

But now, with the growing trend toward story-oriented games (especially those with cutscenes), companies are starting to have their characters talk and hold conversations during gameplay.

Naturally, this occurs in games where a group of characters travel together, since otherwise, there'd be no-one for the hero to talk to (though many games did have solo heroes making one-liners—or just chatting with themselves). Sometimes you get this banter with Mission Control. Oftentimes, the heroes will be traveling the countryside, wandering through a town, or so on, and the characters will talk to each other. Or they might remark on something they just saw, or something that recently happened.

This tends to make the characters feel more "alive" by showing their personality, but it also has the benefit of conveying story and character without hurting the flow of gameplay. If Nathan Drake quips with Elena and Chloe while you're making him explore a ruined city, then you don't have to stop what you're doing just to watch the characters talk. Plus, it gives more of a feel of actually being there with those characters, to hear them conversing while you're controlling the lead hero.

On the other hand, this kind of dialog is easy to miss while concentrating on the game, especially if there are no subtitles and there is action going on. So it's best limited to background detail, with actual game-critical information given in cutscenes.

On the technical side, including unobtrusive dialogue is handy to fill in the boring sequences of trekking across safe/already explored locations. For the same reason, it is sometimes used in conjunction with Dynamic Loading. It is also very closely related to Expository Gameplay Limitation.

Note: If the gameplay stops for any reason for the characters to talk, that's not this trope. Therefore, the skits from the Namco Tales series don't count. Also, if it doesn't involve characters talking to each other and only involves the main character remarking on things out loud, it's not dialog.

See also Boss Banter, which is when bosses taunt the player during gameplay - not quite dialog (as there's no back-and-forth).