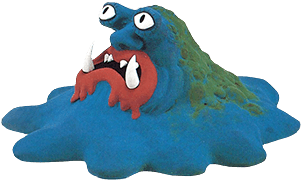 "Oh GREAT. It's Master Belch. What disgusting thing is he up to today?"
"Just when you thought that unsightly pasta stains had no champion, and you were comfortable in a world where mayonnaise didn't fight back, comes a creature made entirely of the stuff that bursts out of mashed caterpillars. These are the rock stars of downtrodden gravy stains and greasy splotches everywhere: a large, intelligent cube of glop that can chase you down and digest you before you've accepted you're being beaten up by an overachieving dessert."
— "Gelatinous Cube,"

Blob monsters. Amorphous due to their unique (lack of) anatomy, these creatures range from mindless eating machines to tricky shape-shifters or something in between. How tough they are varies, whether they're Nigh Invulnerable, or ludicrously fragile. Sometimes based on jellyfish, amoebas and similar invertebrates (or, in sillier cases, gelatinous desserts), this creature can be found throughout speculative fiction environments. Possibly acidic, how it is usually defeated varies between each work, whether by being frozen, or melted, or blown up, or squished, or by heroes who taking advantage of its chemical composition, or other creative methods.

Their appearance will also vary depending on the work, as well as whether they are supposed to be cute or disgusting. Eastern created media tends to depict them as cute gum-drop like blobs with bright colors and small Black Bead Eyes when cute, and when evil, have dark or harsh colors and jagged mouths. Western created works also tend to give them water droplet like bodies when cute, but instead give them large, bulging eyeballs that loosely float in their mass for the same effect; and when evil, they tend to have runnier bodies & usually have other villainous features, such as teeth, or being hazardous to the touch.

If it has anything resembling a mouth, Phlegmings are assured.

A recent sub-variant has become popular on the various Internet art sites — that of the Slime Girl, a.k.a. the "Goo Girl" (DeviantArt or Danbooru) or "Slime Maiden" (Pixiv) — which is effectively the Blob Monster given the Cute Monster Girl treatment, with Suu and Melona being the poster girls of this variant.

In video games, these will sometimes be The Goomba, although sometimes some palette-swapped varieties are harder. Whether they are resistant to drowning or weak to it will also vary, leaning towards the latter if it's the player-controlled character. Sometimes, they can split into smaller ones when killed.

Another feature they commonly have in video games is being highly resistant to one form of attack, yet vulnerable to another. Typically this takes the form of them being hard to hurt with conventional attacks (how do you stab something that has no heart?) but vulnerable to, say, fire or some other sort of special type of damage.

Some form of Elemental Shapeshifter can be (or turn into) this, if they're capable of becoming water, mud/sludge, clay, lava or liquid metal. Compare Super Smoke.

When alien enough, this creature can be classified as an Eldritch Abomination.