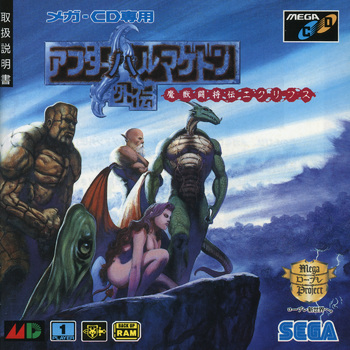 After Armageddon Gaiden: Majuu Toushouden Eclipse translation After Armageddon Side-Story: Demon Warlord Legend - Eclipse is a Japanese RPG released in 1994 for the Sega CD. It was developed by Pandora Box and published by Sega as part of their Mega RPG Project initiative. The game has never left Japan or been translated into English. An English release was planned by Working Designs under the name A Side Story of Armageddon, but was canceled due to the Sega CD losing support.

A nuclear war has brought human civilization to an end and left the Earth a barren wasteland. As if awakened by humanity's dying screams, demons rise from beneath the earth and conquer the lands for their own. The few surviving humans are given the role of being the demons' livestock. In time, the Earth becomes known as Eclipse - the land in which no light reaches.

After a hundred years of strife, Eclipse has been brought under the rule of the tyrant Volzark. Under him, demons have been made to form towns, raise humans in farms, and act more civilized. It's here the story's five protagonists enter the picture - Radune the dragon, Jakos the ifrit, Dhalzam the golem, Freya the succubus, and Loperus the slime. The five of them served as Volzark's most powerful warriors during the war, but are now wanderers seeking a purpose in the now comparatively peaceful Eclipse. Their travels take them down a strange series of events as they begin to uncover the history of the ancient civilizations of Atlantis and Mu and the origin of demons, and they find themselves the last hope for both humanity and demonkind in stopping the evil entity Ra Mu from wiping out all life on the planet.

After Armageddon Gaiden contains examples of: