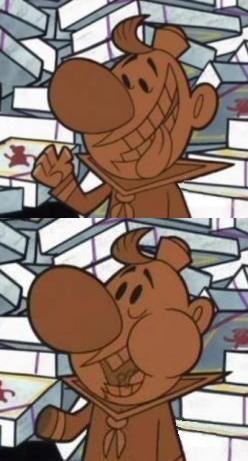 You're taking "Eat me!" a bit too literally, Billy.
"GAZ!! Taste me!! I'm delicious!!"
— Dib (after being turned into bologna), Invader Zim
Advertisement:

When a character is or has been polymorphed into a freakish anthropomorphic pastry or sweetmeat, they may grab a piece of themselves and stick it into their mouth, often remarking something along the lines of, "I taste delicious!" It is, perhaps, self-inflicted Carnivore Confusion.

This trope also covers situations where they remark "I taste delicious!" in situations where, rather than being turned into something edible, they're coated in it instead.

Not to be confused with You Taste Delicious, which is when someone else tastes the character, or with You Won't Like How I Taste, which is about discouraging someone else from finding out how the speaker tastes. Also do not confuse with Autocannibalism, which is a character eating themselves in a Horror Hunger scenario. If this trope is applied to anthropomorphized food (usually for advertising), you may end up with Let's Meet the Meat.

Charmander tries to defend cannibalism by explaining that he wouldn't eat Bulbasaur because he tastes disgusting. Bulbasaur thinks otherwise.

Charmander tries to defend cannibalism by explaining that he wouldn't eat Bulbasaur because he tastes disgusting. Bulbasaur thinks otherwise.