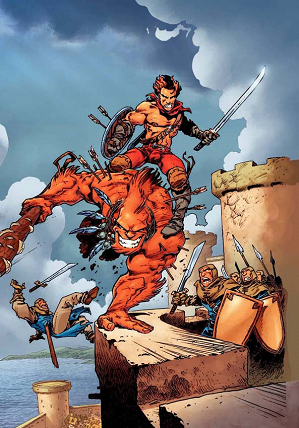 Lanfeust de Troy is a French heroic-fantasy comic series by Arleston and Tarquin, published by Soleil Productions. It features the eponymous hero Lanfeust in the world of Troy, and his efforts to save said world from total dominion by an evil army. The main feature of this series is that each inhabitant has a single magical power, be it useful or useless (melting metal, boiling/freezing water, teleporting, farting from their ears...); however, their power can only be used if a sage, a person who underwent a special rite to lose their power to become a magical conduit, is around and alive.

Sometimes, one person can have the ultimate power, that consists of every single power ever. This is the case for Lanfeust, a young blacksmith gifted with the power of melting metal by looking at it, who, while mending the sword of a passing aristocrat, discovers that touching the sword's pommel, made with the ivory of the Magohamoth, the source of all magic in the world, grants him the ultimate power. Accompanied by Nicolède (the village sage), C'ian (Nicolède's older daughter and Lanfeust's fiancée, who can heal any wound after nightfall), Cixi (Nicolède's younger daughter, who can make water evaporate or freeze) and Hébus (a wild troll Nicolède enchanted), Lanfeust goes to Eckmül, Troy's capital, in order to study his power. But what he'll find there will be a tad bigger than that...

The original series was followed by:

Lanfeust of the Stars provides examples of: