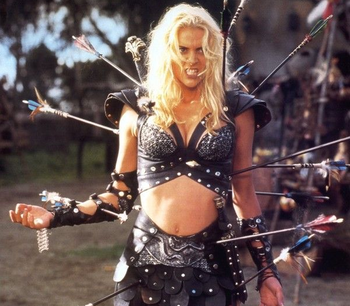 "Pssssst!... Aaaahhhh! Awwh, stings so bad!"
Nimona: Will you chill out? No-one ever got killed with one little arrow!
Ballister: Actually, they have. That is kind of the purpose of arrows.
— NIMONA
Advertisement:

In media, the bow and arrow has nowhere near the killing power it has in Real Life. The densest showers of arrows cannot hope to penetrate even the flimsiest Plot Armor. After all, most dramatic combat plays out hand-to-hand, so arrows are just the preamble to the real fighting.

A character who actually gets struck with an arrow need only grab the shaft and yank it out with little more than some momentary discomfort, then go back to doing whatever they were doing. If they're too busy in the middle of a melee, they can just leave them in place and deal with them when things settle down. In extreme cases, a character might become a Human Pincushion before going down.

Note that this trope applies only to main characters. The rest of the time bows are Almost Lethal Weapons, capable of instantly killing mooks with a single shot.

In real life, the actual damage caused by an arrow will depend on a variety of factors. Arrow wounds often aren't instantly fatal, but the fact that archery was used effectively in hunting and warfare for thousands of years should make it obvious that this trope is rarely Truth in Television. Arrows hurt, and you can't fight much at all with one stuck in you. Getting arrows out of you is also a difficult, painful and dangerous process. Casually yanking them out is not recommended. Arrows were also often covered in poison, or even dipped in putrefaction or animal waste to cause infection, so that even if the arrow itself was not lethal the wound certainly could be.

Dismissing arrow injuries is often used to establish an Implacable Man or someone Made of Iron. The trope is almost always averted when it comes to Arrows on Fire: unlike real fire arrows, which were for setting wooden structures on fire and weren't very good anti-personnel ammonote they were slower, penetrated less, and did not use modern incendiary agents, fire arrows in fiction can immediately set the person they hit on fire. For slings being treated as similarly weak, see Suffer the Slings. Guns Are Worthless is this trope applied to bullet-based weaponry. For a more accurate depiction of getting shot with a bow and arrow (especially English longbows), see Impaled with Extreme Prejudice. For when arrows are more effective than even modern day weaponry, see The Straight and Arrow Path.

When Dracula is helping Ericka through a field of booby traps, he gets pierced by multiple spears, arrows, snakes and a big axe, all without missing a beat.

When Dracula is helping Ericka through a field of booby traps, he gets pierced by multiple spears, arrows, snakes and a big axe, all without missing a beat.