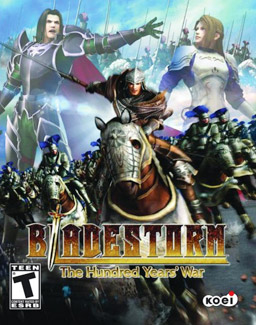 In the 14th Century a quarrel over English succession to the French throne escalated into what history would call the Hundred Years' War. The ongoing war exhausted the standing armies of both sides and dependency on mercenary soldiers grew.

This game from Koei is loosely based on The Hundred Years War, with many gameplay elements from the Dynasty Warriors series. The player creates and plays a single mercenary, but that character in turn can join or summon squads of soldiers to support him or her in battle. It's possible to run around unaccompanied, but it's very easy for a single soldier to be overwhelmed by enemy squads.

In 2015, this received an Updated Re-release in the form of Bladestorm: Nightmare. Among several improvements are the ability to control up to four squad leaders, unlockable 'ace' characters, and a new 'Nightmare' mode story line that sees England and France forced to join forces against a massive army of fantasy creatures led by... Joan of Arc?