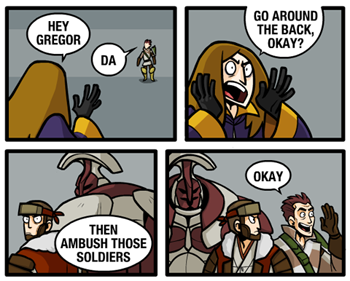 In real life, a general cannot immediately give orders to a unit and have them react instantaneously. Messages have to be sent, colonels, majors and finally captains and corporals have to be reached, and finally the orders need to be received by the soldiers. In some jurisdictions, the higher command ranks legally cannot give orders to troops, and are bound to relay them to the commander of that specific operation. This is doubly true for ancient times.

In strategy games, on the other hand, this doesn't happen. When you, the general, click the screen, the orders are instantly transmitted from thought to deed. Its as if there's some kind of psychic link from HQ to the unit receiving the order. Particularly jarring in ancient settings when a general can give orders to soldiers a town away. That general must have one hell of a loud voice, or a very good herald. Pre-radio militaries developed various methods to cope with this problem prior to the invention of radio telephony, such as trumpets, bugles, drums, fifes, flags, banners, and standards that modern militaries relegate to use on the parade grounds, but these were once genuinely used for transmitting signals.

Even so, this cannot explain the rapidity and accuracy with which orders are carried out in most games. Some argue that if building a command center or a town hall in your average RTS takes 90 seconds tops, then order transmission times must have been scaled down by a similar factor. One could also take the view that the player is controlling the entire command structure rather than just the top level commander. Thus, the player giving orders to an unit on the other side of the world is the local commander taking action, for all that this local commander knows more about the overall state of affairs than they really should.

Triply strange when the orders are relayed in an environment where receiving them would be very hard (dead zones, caves that block radio signals, stormy weather). And if the player has allies, those manage to feed them intelligence data (up to and including firing blind using only the allies' target painting) with zero delays or misunderstanding. Yes, even in settings where these allies may be aliens, robots, foreigners etc., who you'd expect to have multiple language barriers (and sometimes the only communication between them story-wise being murdering each other).

Admittedly this comes under Acceptable Breaks from Reality, as it would be annoying to wait for your orders to filter down through the proper chain of command. It's also justified in the vast majority of science-fiction settings.

What is less forgivable is when the soldiers seem to be completely dependent on the player for orders, sometimes not responding even when under fire from a long ranged unit. There are reasons for soldiers being designed this way: a unit could come under long-ranged fire, respond, and get lured into an ambush. But its still annoying to see your unit get whittled down to nearly no health because you happened to not be around to give the order and the unit just refuses to do anything to save itself. This tends to fall under Artificial Stupidity.

The small-scale variation of this which pops up in Tactical Shooters is Squad Controls; generally more justifiable, as the squad tend to be within the PC's earshot/eyeline, but can raise questions if you're playing a Stealth-Based Mission.

Closely related to Easy Logistics. Much like Command & Conquer Economy only this applies to units instead of buildings being dependent on the players orders. Usually, all three tropes will be present together.

This is so common in strategy games that it may be best to save examples for aversions or particularly blatant examples of the trope.