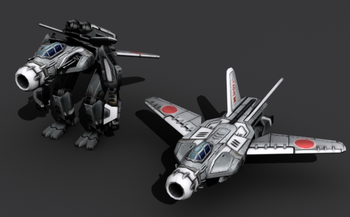 Totally not a Macross Expy.
Advertisement:

A Real-Time Strategy unit type. It has two different weapons, functions, or abilities that can be switched between manually, or chosen automatically depending on the target. Sometimes you may have to research the secondary form before the unit can access it.

There's always some kind of trade-off in these cases. Often, a unit must park itself to use its secondary mode, but gains extended range and attack power as a result, or it loses the ability to target ground units for the power to hit air. Sometimes, a unit can even switch from a land form into an air or sea form. Other times, the secondary mode might just be an outright Super Mode, with the catch being some new contrived weakness, a time limit, or even a high resource or XP cost to obtain it.

It's a step up from Crippling Overspecialization, but beware. It may just end up with two different crippling overspecializations. This type of unit might be a Military Mashup Machine, but it doesn't have to be. See also Stance System and Anchored Attack Stance.