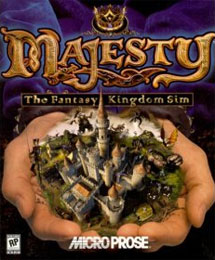 You have inherited the crown of the kingdom of Ardania, a Medieval European Fantasy kingdom with a surplus of heroes but a desperate need of an inspired leader to lead them to victory. Taking up the throne of Ardania, it is your duty as Sovereign to forge alliances with the other races, placate the gods, hire heroes to defend your kingdom, and send them on quests to drive back the Always Chaotic Evil monsters that threaten Ardania's borders.
Advertisement:

Released by Cyberlore in 2000, Majesty: The Fantasy Kingdom Sim portrays a typical fantasy RPG world from a slightly different angle. The game can probably best be described as a city-building Sim with Real-Time Strategy and RPG Elements, but that doesn't quite encompass the extent of the gameplay. The player is cast as the Sovereign of Ardania, a deliberately stereotypical fantasy kingdom, and is given complete control over construction, taxation, research, and the hiring of heroes to defend the realm.

Gameplay starts with the player in control of their palace. From here, they can send out peasants to construct new buildings, including guardhouses for the Redshirt Army, shops, and guilds, temples, and enclaves for other races. The last three all allow the player to hire heroes, the bulk of the game's units. Uniquely, Majesty does not allow the player to command their heroes directly - heroes will act intelligently based on their artificial intelligence, shopping and going hunting on their own time, but they can be enticed to act by placing bounties on specific enemies.

Although the player can cast a few unique spells, the bulk of the gameplay is based at the grand strategic level, where the player must make important strategic decisions. Only one non-human species can be brought to the city, due to Elves vs. Dwarves - should it be the industrious gnomes, the stout dwarves, or the graceful and silver-tongued elves? Many temples are also mutually exclusive, so the player must choose their religious affiliations carefully. The game plays out in a unique fashion, with a clever sense of humor and a well-developed backstory.

An expansion pack, appropriately titled The Northern Expansion, was released in 2002; it was released with the original game in a box set called Majesty Gold. A sequel, Majesty Legends, was in development, but was eventually canceled. Paradox has since acquired the rights to the franchise, and Majesty 2 is out now.

A version of Majesty has been recently developed for cell phones and iOS Games, by Herocraft and Paradox Interactive. To save on memory, it cuts out and/or fuses the functions of many aspects of the original Majesty; for example, you can only build temples to Agrela, Krypta, or Krolm, and they're all mutually exclusive. Additionally, you can no longer hire gnomes, their dwelling instead providing a one-time reduction to construction time on all buildings on the map, although it still prevents you from hiring elves or dwarves; and several types of heroes, such as rogues, are removed entirely. This version takes, if possible, an even more tongue-in-cheek look at the stereotypical fantasy setting than the original version did, replacing the graphics with cartoony sprites and adding a number of blatant references (your wizards can randomly be named Gandalf). The campaign is significantly shorter as well, comprising a handful of linearly unlocked missions.

Apart from the main games, numerous spin-off games set in the same universe have been released. The first one, Defenders of Ardania, is a tower defense and offense game. The second, Warlock: Master of the Arcane, is a turn-based 4X game in the style of Master of Magic, and is considered a Spiritual Successor of that game. There's a third spinoff game titled Impire (no, that is not a typo) which borrows gameplay elements from Dungeon Keeper. It was released on February 14, 2013.

Both the main games and the spinoffs can be bought at Steam.