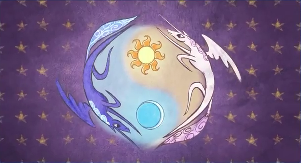 Due to its nature as an object that provides warmth and light, the sun has played symbolic and important roles throughout the history of fiction. Undead or demonic creatures have been depicted as being vulnerable to it, likely to its associations with light and fire. If associated with malevolence, can go in line with Light Is Not Good—imagine sunburns, imagine merciless UV rays scorching everything they touch. This can get even worse with monsters and antagonists that are either made of those elements and/or are able to utilize them without any ill-effect to their being.

On the other end of the spectrum, the moon also has connotations of light, but it's been associated with The Undead and other supernatural creatures. Lycanthropes, the most famous example, are depicted as having their transformations trigger when the moon is full. Can also go in line with Light Is Not Good, although it can go with Dark Is Not Evil when dealing with characters like Friendly Neighborhood Vampires. The moon does give light in the darkness, and just because it's less constant and more mysterious doesn't make it bad.

The contrast between the two is a common Cosmic Motif (and color motif, particularly yellow and purple, if not outright black and white). Compare Red Oni, Blue Oni and Elemental Powers. Light/Darkness Juxtaposition can apply when the moon is associated with darkness and the sun with light. Given that the sun is a fiery ball of energy and the moon is responsible for the tides, this trope can also lend itself to Fire/Water Juxtaposition. See Night and Day Duo or Male Sun, Female Moon if this contrast is evident in a pairing of characters.

The sun and moon have also been personified by having both of them be a specific sex. For example, the pairing could be a masculine and harsh sun paired with a feminine and soft moon. In historical religions, the sexes associated with the sun and moon vary greatly, and in some cases, both a male and female deity may be ascribed to a single celestial body. According to Wikipedia, it is somewhat more common to view the sun as male and the moon as female due to the prevalence of that portrayal in Greek and Roman religion. (It might also have something to do with certain other twenty-eight-day cycles.) In fantasy fiction, this duality is often manifested in a contrast between a solar God of Light and a God of the Moon.

Fridge Logic may apply to any reference to moonlight affecting beings or objects since the moon has no actual light of its own (it's a hunk of space rock orbiting Earth) and its glow is just the sunlight that is being shone on the moon and reflected by it. Hence, in theory, anything that moonlight should trigger, normal sunlight should actually be triggering as well (and vice-versa). Of course, one may then theorize that this light somehow "changes" when reflected...